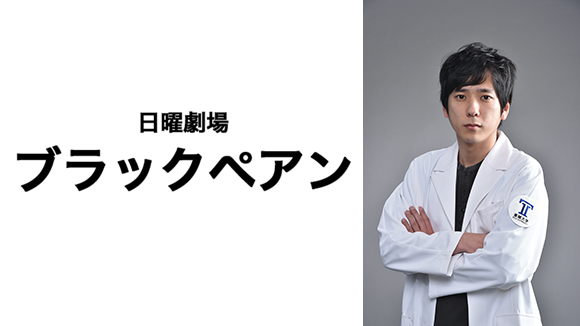 Arashi’s Ninomiya Kazunari will be starring in TBS new drama “Black Pean” (Sunday, 9pm) starting April. This is his first time starrting in TBS’ Sunday golden timeslot and first time challenging the role of a surgeon. He will be taking the baton from fellow member Matsumoto Jun whose drama “99.9 Season 2” airing in the same timeslot is currently enjoying high ratings.

The drama is based on the new edition of “Black Pean 1988” by Kaido Takeru. Ninomiya plays Tokai Seishiro, a genius surgeon with 100% success rate but whose arrogance often causes friction with the people around him. He is called the devil of the operating theatre by colleagues.

Synopsis: Tokai Seishiro (Ninomiya Kazunari), a surgeon who is a genius in suturing techniques, is a loner with no interest in career advancement and an eternal rank-and-file medical staff at Tojo University Medical Hospital. He is called the devil of the operating theatre by colleagues. While he prides himself for his 100% success rate, his arrogance constantly causes friction with the people around him. According to newly appointed doctor(s) from other universities, surgical skills are completely unnecessary. The latest surgical equipment is brought in in an attempt to introduce new forms of surgery. Questioning whether there is an ulterior motive, Tokai opposes it. Meanwhile, jousting for the truth hidden in a black haemostatic forceps called the “black pean” and Tokai’s own connection are both revealed.