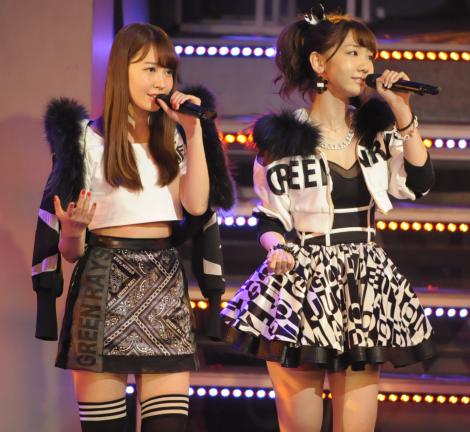 On January 25, during the final performance of the “AKB48 Request Hour Set List Best 1035 2015” at the Tokyo Dome City Hall, AKB48 debuted their upcoming 39th single titled “Green Flash”. It will be released on March 4. It was also announced that Kojima Haruna and Kashiwagi Yuki were chosen as centers for the song. This is the first time in Kahiwagi’s 9 year- career to be chosen as center and the announcement was received by a large cheer by the audience of 2,000 people.

The song is a homage to the 1986 French movie “The Green Ray” directed by Eric Rohmer . When the title was announced, fans immediately switched to green pen light impressing the members. AKB48’s spring singles are centered around graduation song but the latest song will be different and is described as a heartbreak song. Members Takahashi Minami and Yamamoto Sayaka will have rap parts.

Kashiwagi states “As this is the first time for me to center, I have to rely on Kojima-san! (Laughs)”, flattering her senior. On the other hand Kojima says “I like the singing voice of YukiRin (Kashiwagi), and I am glad to sing at the center together with her”.