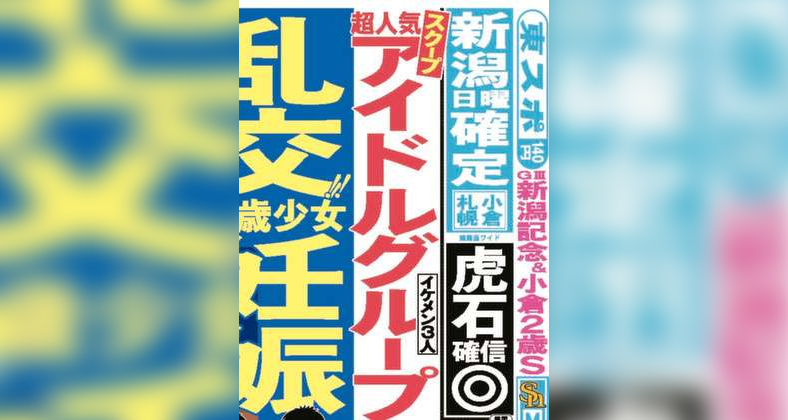 According to a blind item from Tokyo Sports, it’s rumored that 3 young men (A, B, C) from a “super-popular” idol group were involved in some drunken debaucheries together earlier this year.

The gossip magazine, known for their wild gossip of varying truth and credibility, claims that back in February, the three aforementioned singers and two friends (D, the son of a celebrity couple, and E, a handsome unemployed guy) met at a bar in Meguro for a mixer.

In attendance were 7 to 8 girls, supposedly of college-age. For reference, the drinking age in Japan is 20 years old, so they have to be at least 20, right?

After most of the girls left, the guys and two remaining girls (one in college, the other 17-years-old) decided it was time t head out. They lined up to share a taxi headed for Shinjuku, to a one bedroom apartment with a separate living room owned by one of the idols (A).

The two girls left at dawn before the guys woke up.

As it turns out, this group of men went without protection. It also turns out that the 17-year-old is now pregnant.

“There’s no way it’s mine,” they all insist, trembling in fear when in actuality it’s likely that it’s one of them. Originally they thought she was lying and simply after their money, but the pregnant girl hasn’t requested any settlement money. The idol agency doesn’t know yet.

Now 18-years-old, she is 7 months along in her pregnancy.

A lot of names are being thrown around on 2ch, girls channel and practically every single matome for that matter, and some of you guys have even been posting about it here in the comment section (which sparked the creation of this post).

We’re not at liberty to name any names, but you are in the comments below. Who do you think it could be? Or is it just pure fiction?