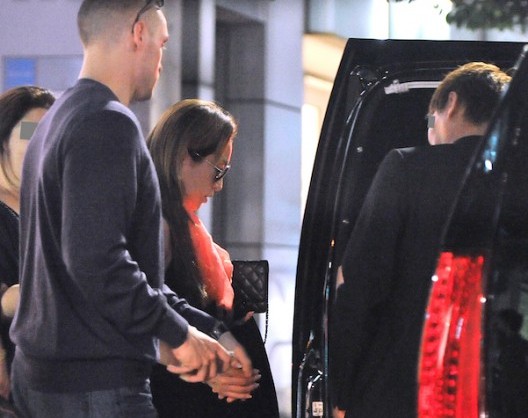 According to a report from gossip magazine FRIDAY, sticky caps singer aYUMI HAMASaKI was spotted in sunglasses leaving a Nishi-Azabu Bar with her husband. Yes, this is not an unusual occurrence, but what struck this reporter as bizarre is that absolutely no one recognized her or they simply did not care.

The singer’s 15-year career has allowed her to be dubbed the “Empress of J-Pop” due to her popularity and widespread influence throughout Asia. However, her reign appears to have ended around the time of the release of her 2012 album ‘Party Queen’ in which many fans dub as “trashy” or “Did Ayumi Hamasaki even release an album in 2012?”. Her latest single ‘Feel the love / Merry-go-round’ sold a measly 30,000, her worst ever.

Just earlier this year Hamasaki (35) married a 25-year-old medical student at the University of California she met a year earlier while on vacation. The couple settled down in Los Angeles and communication with her agency Avex has since been increasingly difficult. According to CYZO, upper management at Avex comments that “she [Hamasaki] does not have the same motivation to work as she did in the past” and that “her sales no longer warrant the burden of draining costs from her transportation”.

Her sales are not the only thing suffering. Tickets for the star’s current tour ‘ayumi hamasaki PREMIUM SHOWCASE ～Feel the love～’ sell for 9,300 yen, higher than her usual 8,500 yen to make up for all the unsold tickets. She is also performing different songs on different days in order to have fans come back for more. Whether it’s just clever marketing to help fund her constant trips between Tokyo and Los Angeles, she realizes the dive her career path is heading towards and taking desperate measures to make up for it.

In the past, her albums were scheduled to be released without any competition, but a new development shows she is no longer granted priority. Her 15th Album ‘CoLOURS’ is planned for a June 2nd release, the same day as label-mate Kis-My-Ft2’s 3rd album ‘Kis-My-Journey’. The group’s previous album ‘Good Ikuze!’ took the top spots in DVD, single, and album sales at the same time, a feat previously only accomplished by Ayumi Hamasaki.

Since her pristine track record had been tarnished from her past few albums, Avex is unsure of what to do with her and where her future within the company stands.