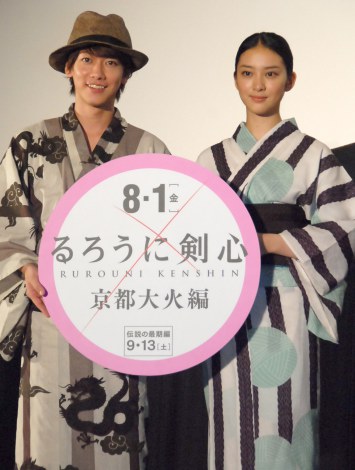 Takei’s yukata featured large, light green mari balls. Sato cheerfully teased his co-star in front of the press by calling it a ‘cabbage yukata’. “A cabbage yukata, that’s a new one. How cute,” he said playfully, making Takei puff out her cheeks and say, “You’re terrible…”

Sato (who plays the main character Kenshin Himura) also reflected back on the approximately 30 locations where the “Rurouni Kenshin” movie sequels were filmed, stating that of those locations, Kumamoto stands out the most in his memory. “A Kumamon with a cross-shaped scar came [to the set],” he explained, amusing the press conference with the mental image of a battle-scarred hitokiri Kumamon.