Early look at the 35th issue of Kodansha‘s Weekly Shonen Magazine has revealed plans for a TV animation adaptation of Fuuka, by author Kouji Seo. Not much details are divulged in the issue save the first character visual for the titular character, Akitsuki Fuuka that you can see after the jump, and a slightly NSFW announcement color spread that you can see here. Other than that, it is also reported that the official website (currently still an empty page) will stream the first PV on Wednesday. 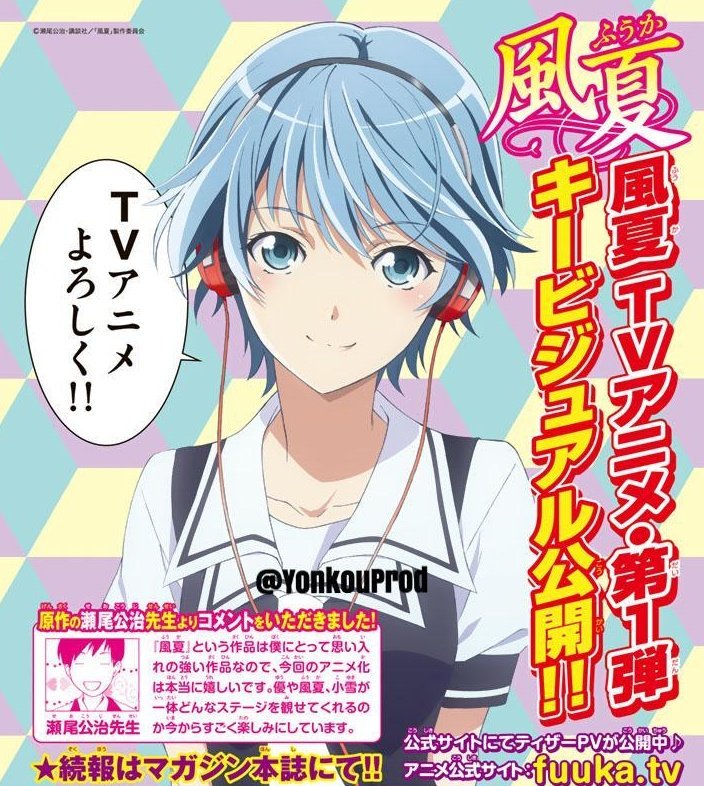 Fuuka is a romance/drama manga that revolves around the relationship of a shy young man named Haruna Yuu, who switched schools at the beginning of the series. In the town that his new school is located, Yuu met the titular heroine, Akitsuki Fuuka, a free-spirited girl that doesn’t even have a cellphone. The central theme of the drama is music, with the two later ending up playing in the same band.

Fuuka began serializing in 2014, right after the end of author Kouji Seo’s previous work, Kimi no Iru Machi (A Town Where You Live) that is also of the same genre.The Hiroshima-born author has been active since 1996 and is famous for creating youth drama/romance series such as the aforementioned Kimi no Iru Machi  and his first hit, Suzuka. The  The 12th volume of Fuuka is set to be released on August 17.