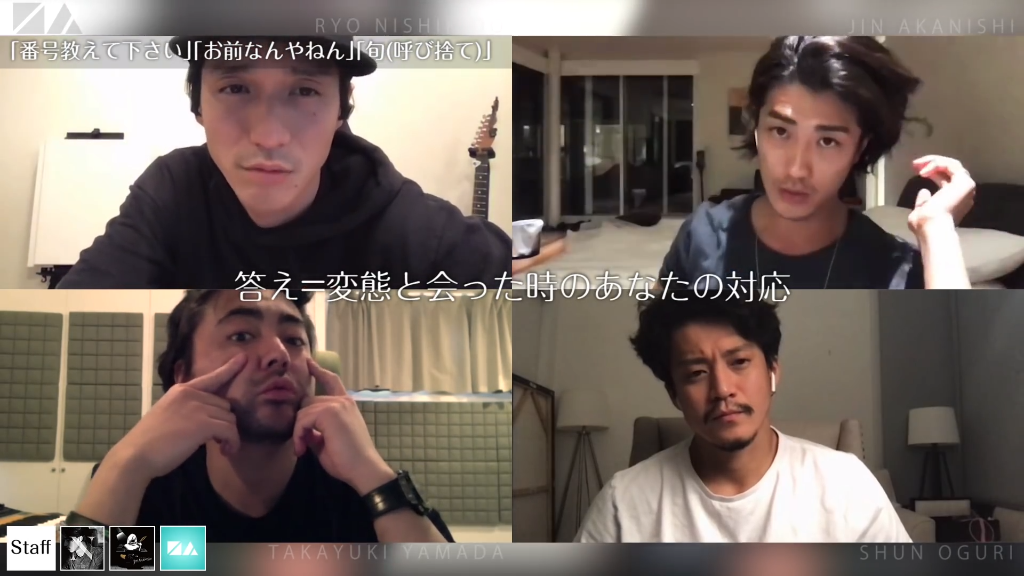 Longtime friends Ryo Nishikido, Jin Akanishi, Shun Oguri, and Takayuki Yamada have all joined together to host their own video call! Due to COVID-19 meeting in-person is not recommended, and practicing “social distancing” has become a part of most people’s daily life. Using software such as FaceTime, Zoom, and Skype have all been popular choices for hanging out.

The video was uploaded on “NO GOOD TV”, a YouTube channel created in support of Ryo and Jin’s unit N/A. Six videos have been uploaded so far, with three out of the six just featuring Ryo and Jin. Takayuki joined them for vol. 2, and then finally the four of them came together for vol. 4 and the latest video vol. 5.

In this video the boys answered various questions such as what they were to do if they came across a mysterious phone. Shun said he would simply just toss it away while Takayuki said he would wait for someone to call.

They also went on to talk a bit about each others personalities, with Ryo stating that Jin is very sociable and it’s very easy for him to make friends. Ryo stated that even at 35 he’s still quite shy!

Check out the rest of their videos on NoGoodTV via YouTube.