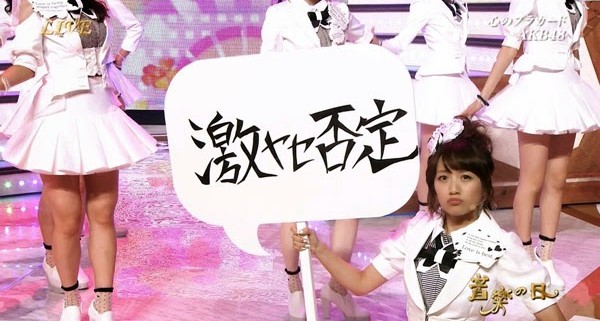 In the past couple of months, many have voiced their worries for AKB48 general manager Minami Takahashi and her super thin physique. At AKB48’s performance at ‘Ongaku no Hi’ earlier this month, she even held up a sign denying how thin she is during the performance of ‘Kokoro no Placard’.

On the August 27th episode of MBS’s radio show ‘Appare yattemasu!‘ Minami’s love for katsudon (a particularly unhealthy dish of rice topped with a deep-fried pork cutlet, egg, and condiments) came into question.

Her co-hosts T.M.Revolution (Nishikawa Takanori), TETSUYA (L’Arc~en~Ciel), Kendo Kobayashi and Yuki Morisaki were all shocked to hear this considering how thin she is. Kendo questioned, ‘why do you seem so underweight if you eat katsudon?’

In response, Takahashi then went on to reveal her weight: 37kg, or roughly 82 pounds. As one of the longest running members of AKB48, Takahashi’s busy schedule and constant live performances have resulted in her keeping all the extra weight off, but you also have to factor in her small stature: 148cm, or around 4 foot 10.

The hosts then offer various advice to her for to gain more weight, such as drinking oil or smearing her lips with lard.

(via Model Press, translation from JenJen)