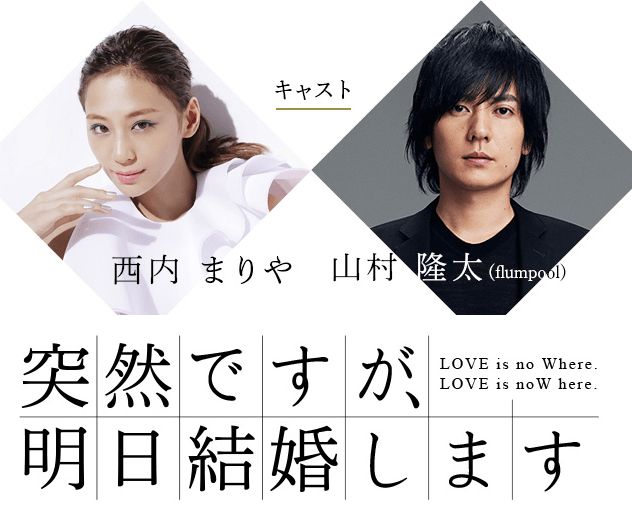 The next Getsu9 drama will star Mariya Nishiuchi and Ryuta Yamamura, the lead vocalist of flumpool. This is a milestone for the two talents as Mariya will lead her first Getsu9 and Ryuta will make his acting debut. Broadcasting of “Totsuzen Desu Ga Ashita Kekkon Shimasu” (Even Though It’s Sudden, We’re Getting Married Tomorrow) will begin on January 23rd.

The live-action drama is based on the manga by Izumi Miyazono. The series currently runs in Petit Comic.  Here’s a summary of the romantic comedy:

“Successful career woman Asuka Takanashi has an old-fashioned dream of getting married and becoming a housewife. After her long-term boyfriend breaks up with her to pursue his own career goals, she encounters Ryu Nanami, a popular newscaster at PTV. Asuka and Ryu get along well, but the last thing he wants is to ever get married. This level-headed pair who want the opposite things in life should never get involved, except…”

Script is written by Yukiko Yamamuro (Bizan) and Yasuko Kuramitsu (Love Song). Producers include Hiroyuki Goto (5 → 9 ~Watashi ni Koishita Oterasan~) and Ayako Oki (Naomi to Kanako). Be sure to catch this drama in January!