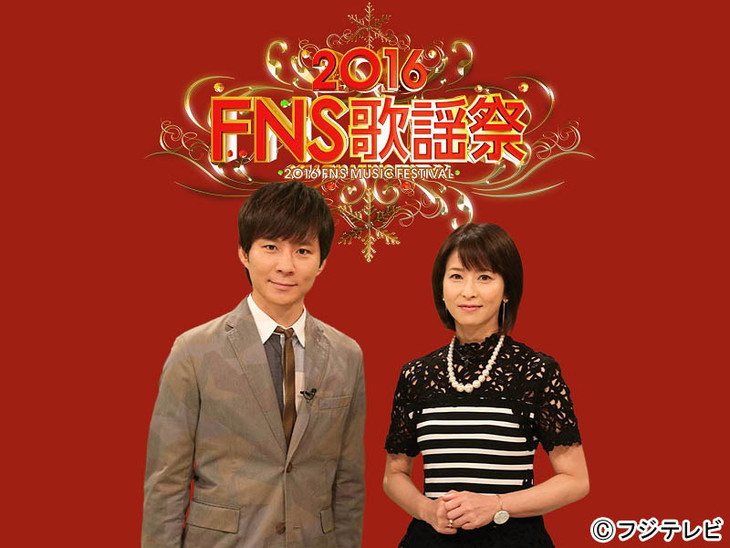 Like last year, this year’s edition of Fuji TV’s annual year end music special, FNS Kayousai, will be split up over two nights. The first night will take place on December 7 at Tokyo’s Grand Prince Hotel Takanawa, while the second night will take place on December 14 at Fuji TV’s headquaters, also in Tokyo. The first set of performers was already announced, and the second and third sets were recently revealed.

The second lineup announcement revealed that Yumi Matsutoya and Ken Hirai will be performing on the show’s first night. This marks Yumi’s first time appearing on FNS Kayousai. On the show, she’ll sing “Smile for me”, the theme song for the current Fuji TV drama “Chef~Mitsuboshi no Kyushoku.” She’ll also perform her 1983 song “Dandelion~Osozaki no Tanpopo” as a duet with Ken.

More details on the actual content of 2016 FNS Kayousai have emerged as well. On the first night, Yakushimaru Hiroko and Hashimoto Kanna will sing “Sailor Fuku to Kikanjuu” together since both women have starred in the film of the same name. That night will also feature a special segment supervised by Shinkai Makoto, the director of “Kimi no Na wa.” Kamishiraishi Mone and Hata Motohiro will perform during this segment. The first night will also feature Johnnys collaborating with artists: TOKIO’s Nagase Tomoya and Yuzu singing “Sorafune”, V6 and Hata Motohiro singing “Beautiful World”, and Kis-My-Ft2 and Naoto Inti Raymi singing “AAO.”

The second night will feature a Hirose Kohmi hit medley. During each song in the medley, she’ll collaborate with an artist who was born the year the song was released. There will also be a tribute to BOØWY featuring T.M.Revolution, Ayanocozey Show, DAIGO, HISASHI, Yamamoto Koji, TETSUYA, and Takahashi Makoto.