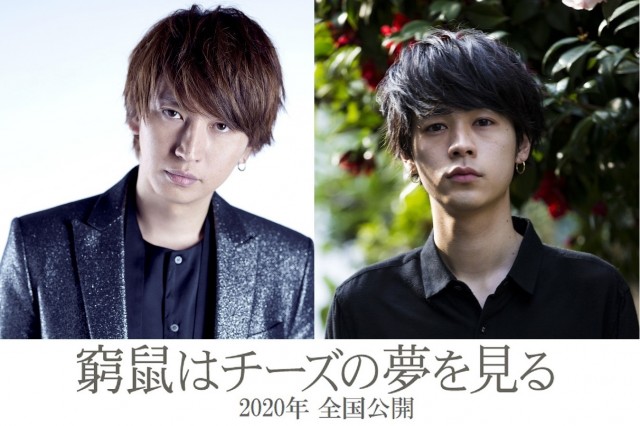 The newest live action manga adaptation announcement took fans by surprise! Kanjani8’s Ohkura Tadayoshi and Narita Ryo will be headlining “Kyuso wa Cheese no Yume wo Miru!” (The Cornered Mouse Dreams of Cheese) movie. Depicting sexuality issues and passionate love between men, the movie will be directed by Yukisada Isao (Narratage, River’s Edge). The movie is slated for a 2020 release.

Ohkura will be playing the character Otomo Kyoichi who works for an advertising agency. His indecisive personality causes him to commit adultery repeatedly. A private detective was hired by his wife to investigate his affairs, which turned out to be his junior (Imagase Wataru) from the university who he hasn’t met since graduation. Imagase offers to hide his infidelity in exchange for his body.

Ohkura Tadayoshi comments “Honestly, I think it’s a pure love story. Of course, I was surprised. Nobody really understands the reason for falling in love.” “There are no boundaries for people to love other people, and I think it’d be nice if this movie can make you think of that.”

Narita Ryo hopes to depict a romance that everyone can sympathize with. Director Yukisada Isao, who has helmed epic romantic movies such as “Crying Out Love, in the Center of the World” says that “This will be a movie about accepting people.” With regards to the challenge of his new movie, he believes that the delicacy and sex appeal of the two men will make for an unprecedented movie. “I have made lots of love stories before, please look forward to a new form of love.”