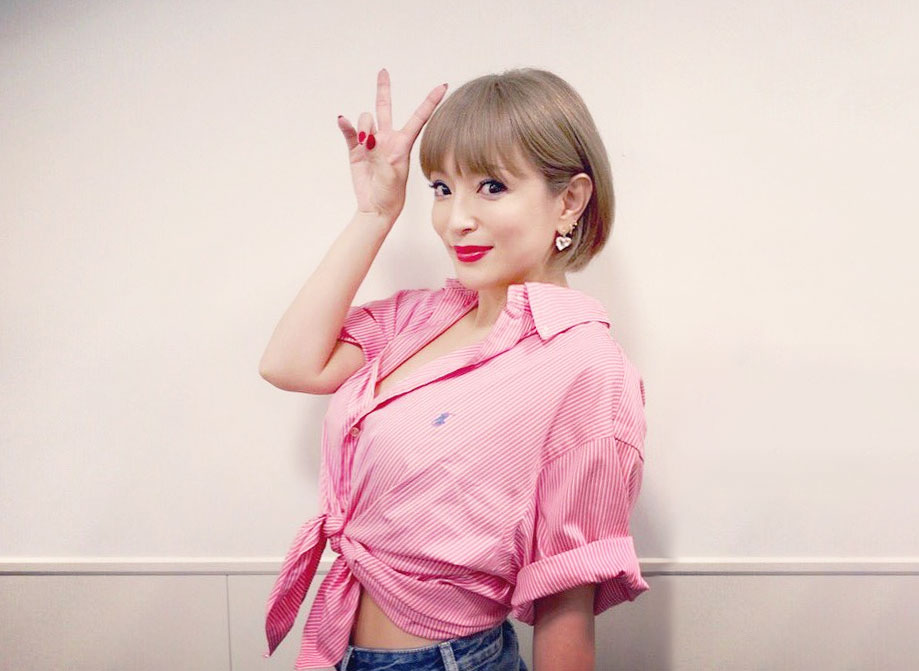 In the opening segment called “Ayu Block“, the host peeled pieces off a board to reveal personal pictures from Hamasaki’s personal life from her lifestyle book released in 2014 (all of which was filmed ahead of her house photo drama earlier this week).

The mansion that sources say Hamasaki paid 1 billion yen in cash for was built on land that exceeds 900 square meters, and is reportedly adjacent to Matsuura’s former residence.

Hamasaki’s newly moved-in three-story home boasts a 60-tatami mat “party room” and 50-tatami mat guest room (In Japan, the size of a room is often measured by the number of tatami mats which roughly equate to 1.65 square meters each).  As the mansion was built towards the end of the economic bubble in 1992, marble is abundantly used inside (which is something Hamasaki’s mother loves, as they live together). 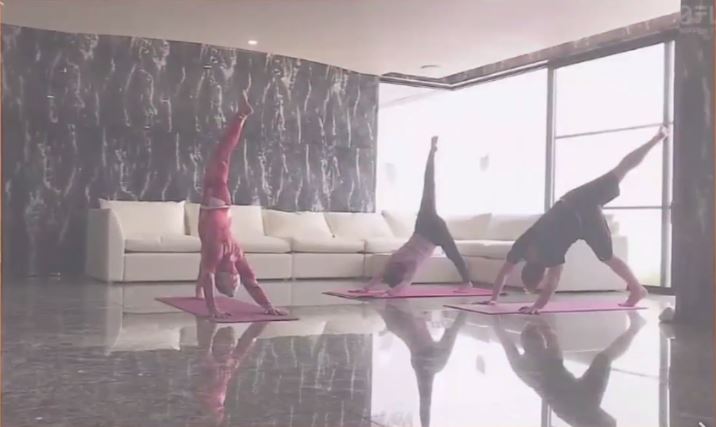 Every morning, she calls her yoga instructor over to practice the physical, mental and spiritual discipline with a friend (presumably Timmy Wellard?). She corrects the host, saying this is her “training room”. 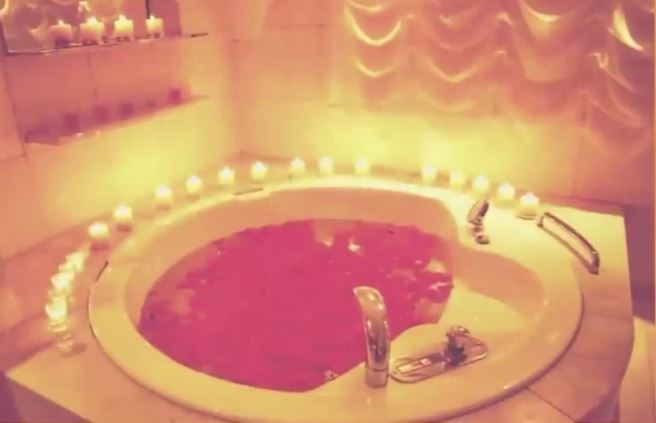 Ayumi Hamasaki is a known bath fanatic. The program showed off her gorgeous circular bath tub, which was lined with candles and filled with rose petals and rose-tinted water 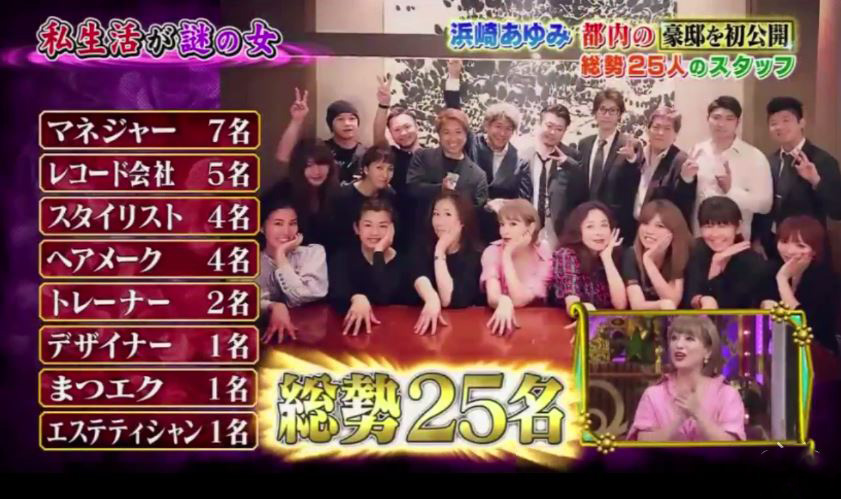 Ayu brought 25 staff members to the taping of the episode, including managers, record company officials, and her glam squad:

She clarifies her trainers are around for standby (when there is free time between filming, as filming can go on for a while). According to comments left by industry insider “ProllyWild” in the comment section of the previous post, this is a normal amount of staff for a celebrity of her magnitude who does not do variety appearances often. 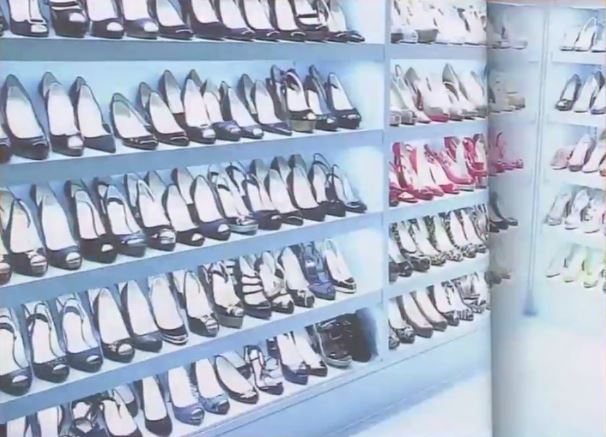 Ayumi Hamasaki’s designer shoes are not really for wearing, but rather for decoration as she likes looking at them. She doesn’t know how many she has.

She seemingly doesn’t like wearing them—she usually only wears sandals when she lives her day-to-day life. 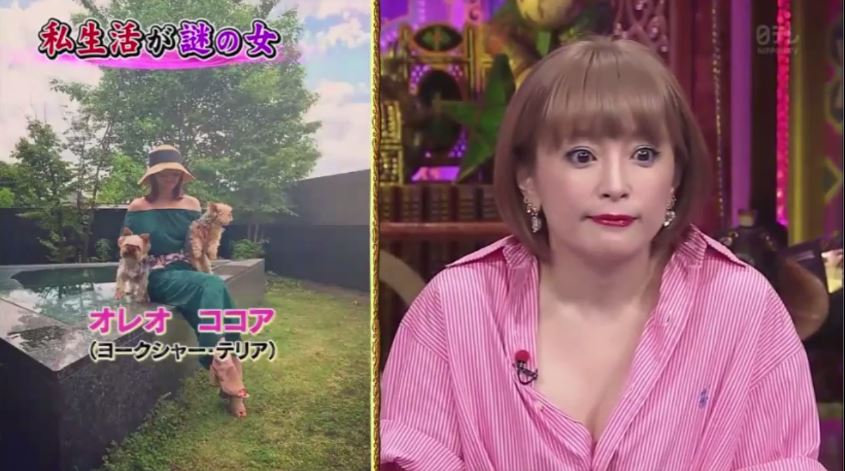 She literally floored the hosts when a picture of her with her Yorkshire Terriers Oreo and Kokoa were shown.

“Did you go to a National park or something?“

Built on her rooftop, she is sitting on a structure that looks like a pond with its reflection—but it’s really a skylight (window) into the floor below. 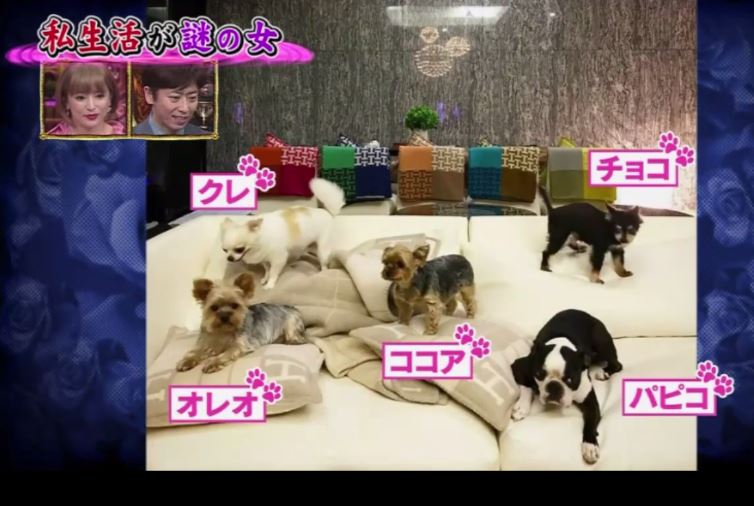 Ayu loves her small dogs. She has five at her home, and often brings them along with her on tour: 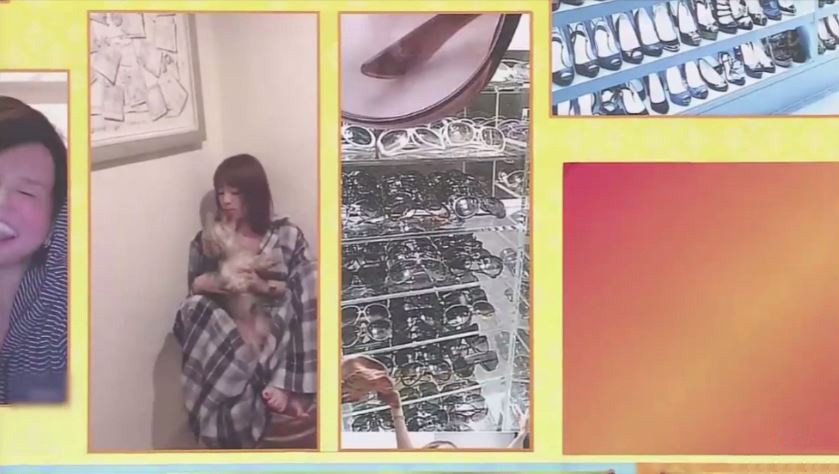 Ayu showed off her shelves of sunglasses, of which she has three cases of. 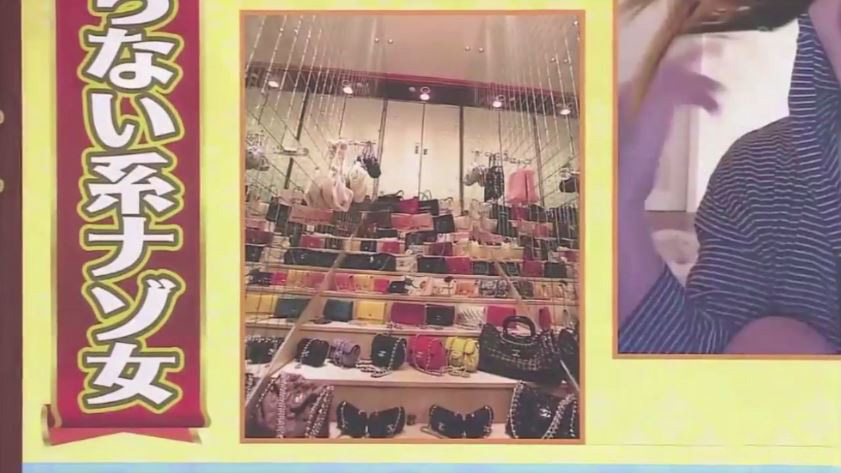 A picture is shown of Ayu’s collection of Chanel bags arranged on steps in a small hallway with mirrored walls.

Besides her personal life, the show looked at her impact as a celebrity.

Incomes a pop-up nostalgia board where they talk about Ayu’s impact on pop culture, showing clips of her debut video “pokerface” and the covers of her second studio album “Loveppears“. She was so big that when she released a new song, there were huge lines at record stores. When an album was delayed, avex’s stocks would plummet.

The Fall of Ganguro with the Gyaru Boom 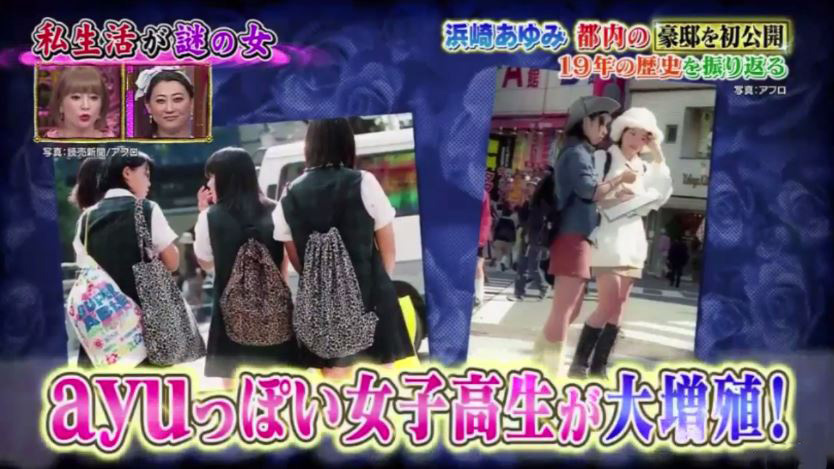 Using the dark skin-toned “Appears” single cover as a transitional topic, they note Ayu’s come-up in the late 90’s and early 2000’s coincided with the rise of Gyaru fashion which she helped further popularize.

Eyebrow comedian Nora Hirano, who is the same age as Ayu, talked about her days as a Gyaru, stanning for Ayu’s 2000 hit “Vogue“. 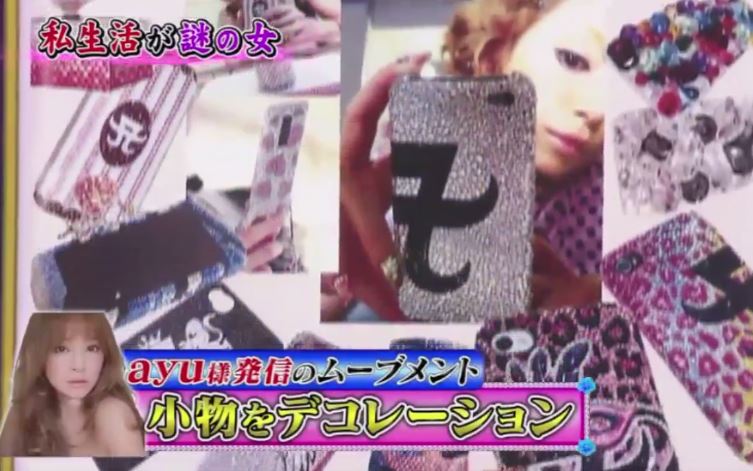 They talk about her being known for bedazzled phone cases. She admittedly now uses a plain phone case and doesn’t really use her phone. 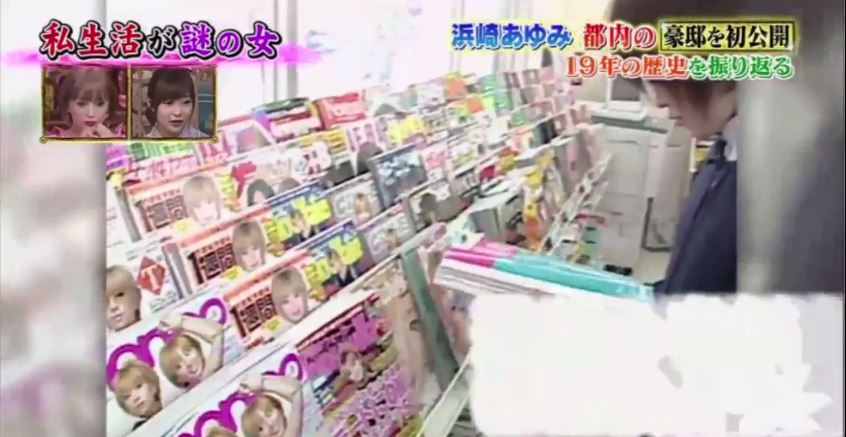 In her heyday, she monopolized literally every magazine cover at one point. Talent only.

The promotion for “A Best” was extensive. Between March and April 2001, Hamasaki appeared in over 40 magazines. 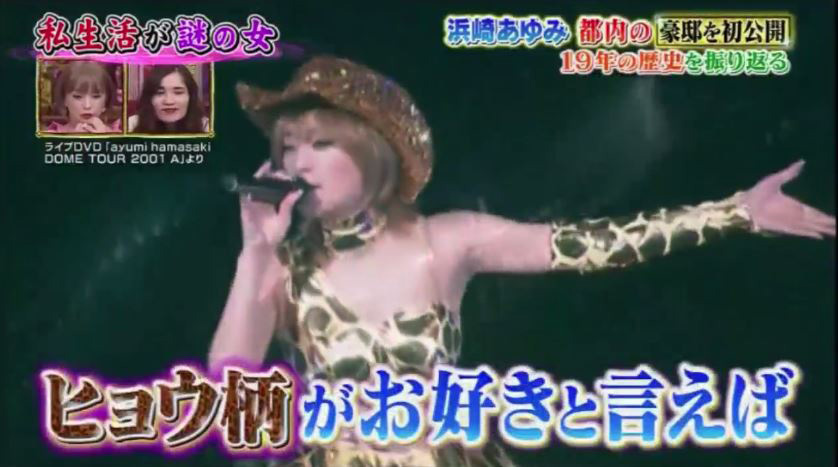 She is credited with popularizing leopard print in Japan, as well as Camo and Zebra. 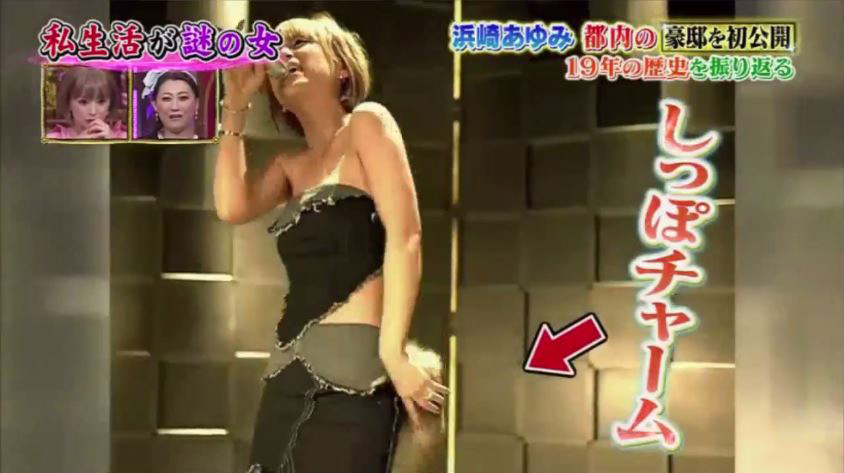