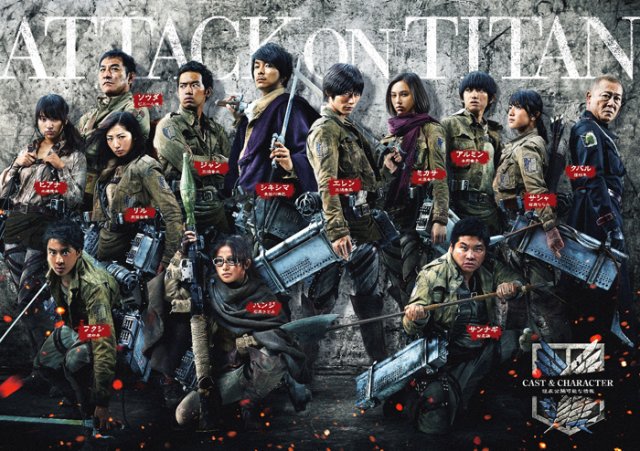 The first part of the Attack on Titan films premiered in Japan last August 1. The film’s director and special modeling director fired back at criticisms received by the film. Recently, the Attack on Titan creator also responded, urging skeptics to check out the movie. If you missed the meltdown that happened in recent days due to criticisms received by the film, here is a bit of rundown. A new extended trailer of the movie was also released by TOHO.

A famous Japanese critic Maeda Yuichi of Cho Eiga Hihan had given Attack on Titan a rating of 40 out of 100. The director of the film Higuchi Shinji, caught wind of the harsh criticism and responded on Twitter “I did it! If the experts had praised me, I wouldn’t have known what to do, but this makes me feel better,” he wrote. “Speaking of which, who are the idiots who sent these guys invitations to the preview?”

The post was already deleted but it went viral and the director later posted an apology. “If there was going to be an explosion of comments, I wish it had been for a better reason.” he wrote. “I’m really ashamed. I’m sorry to everyone involved for being a nuisance.” He went on to clarify his remarks somewhat: “Who I’m really ‘outraged’ at are the blockheads in charge of publicity who sent preview invitations to people who don’t deserve to be shown private screenings, and let them into the screening room once they’re identified. I have no way of knowing how my personal feelings will be received, but I didn’t lose my temper.” He also tweeted that “I’m the real blockhead… for thinking that [the person who leaked his posts] was a friend.”

The film’s special modeling director Nishimura Yoshihiro also has words for the critics. He was heavily involved in the film’s special effects and bringing the man-eating Titans to life. Due to complaints about how the movie’s visuals does not match that of Hollywood films, Nishimura fires back at critics.

He took to Twitter on Saturday —the night the film opened in Japan— where he wrote:

A few moments later he tweeted the qualifier, “I’m talking about people who compare everything to Hollywood films.”

His rant wasn’t done though.

I’m sorry, but deciding what movies to see based on their budget, and comparing everything to Hollywood, that’s like how some people feel secure buying Okame natto [one of the most popular brands of natto in Japan] when they go to the supermarket. They have that absolutist ideology where if everyone says it’s good, they believe it’s good too. I think I’ve got it now, Thanks!

Much of the criticisms stems from the changes and how the movie feels so different from the original work. Perhaps, in response to the criticisms, the movie’s distributor TOHO unusually uploaded an extended trailer of the movie on August 6, five days after the movie’s premiere.

In an interview with Yahoo last August 11, Attack on Titan creator Isayama Hajime addressed the criticisms, calmly as opposed to the film’s director and special modeling director. He also mentioned that he was heavily involved in the production of the movie.

“We knew that we were going to get a lot of different opinions going into this,” Isayama remarked. “We welcome all of the thoughts and criticisms of this movie and we want to try and learn from them as we move forward.”

To that end, Isayama has since encouraged current skeptics to go see the movie, asking that they watch the promotional videos in advance to see if it could appeal to them.

“If you feel like seeing the movie even a little, please check it out. It might be a little selfish of me to ask, but I think people may end up enjoying the movie.”

The film opened at no. 1 during its opening weekend but has dropped to no. 5 in last week’s box office ranking. It will be worth taking note of whether the first part maintain legs at the charts and how well the second part performs when it opens on September 19.