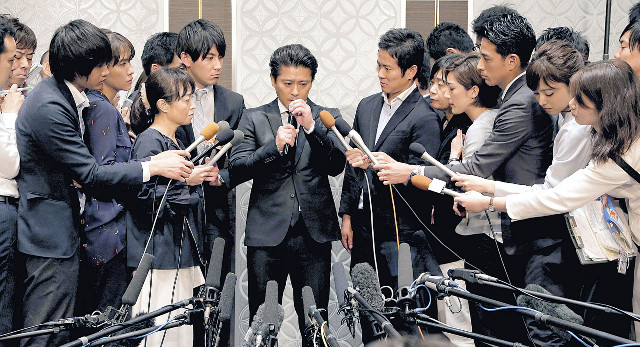 On April 25, Wednesday, news broke that TOKIO member Yamaguchi Tatsuya was being investigated for “forced indecency” with a 16 year old girl by the police.

A press conference was held on the 26th and Yamaguchi appeared wearing a dark suit and black tie, lowered his head for 30 seconds and apologized. “I will spend my days taking a hard look at myself and praying that the victim, her family and her friend can someday be at peace and return to their lives before this took place,” said Yamaguchi. Accompanied by the lawyer, he explained the incident. He said he was contacted by police in late March and reported it to Johnny & Associates in early April. It was also announced that Yamaguchi will be indefinitely suspended from activities.

While shedding tears, Yamaguchi apologized to the victim, related parties and fans. Continuing, he described the lead up to the incident. Yamaguchi said he had been working from a hospital since around Jan. 15 to “rest his liver” and improve its function. “I’ve been told by my company not to drink too much,” he said.

He was discharged on the morning of Feb. 12 and went home to sort out his belongings. He said he eventually began drinking and recalled being drunk by the time he contacted the girl, who he knew through work. According to police, he said she visited his home with a friend at around 8 p.m.

Yamaguchi claimed his memory of the encounter is fragmented due to his drunken state — he said he had downed a full bottle of shōchū (a type of Japanese spirit) that day — and said he later heard from the girl and her friend that they had left after 30 minutes to an hour.

When asked about the thoughts of his fellow members “I don’t know what to do when I think of what they must be going through,” a sobbing Yamaguchi said when asked about his comrades of 23 years. He did, however, seem to cling to a glimmer of hope that someday they could be reunited.

“If my seat is still left, if I can go as Tokio again…,” he said without finishing the sentence.

During the news conference, the lawyer read aloud a letter from the parents of the victim “What my daughter suffered is unforgivable as a parent.” stressing Yamaguchi’s accountability “but, for my daughter and for Mr. Yamaguchi, there is a future. We do not want one person’s future to be robbed entirely.” They also asked Yamaguchi to think about his future and acknowledge the psychological damage their daughter suffered.

On his “Vivit” show, Kokubun Taichi said, “Yesterday, TOKIO was recording a show with Fuji TV, and we only found out after filming” he said. “I learned of it after 6:30 p.m. when the recording ended. Our manager gathered the members except Yamaguchi and told us that these are being reported “

“Our mind went blank and and we cannot understand what was being talked about. Recently, we film as 5 members for about once a month and Yamaguchi seemed like his usual, all the other members did not notice anything.”

He was in contact with the other members until late at night and agreed that it is a joint responsibility and that they will accept any punishment.

NHK “R no Hosoku” – cancelled its April 25th and 26th broadcast and is replaced with another show. NHK on Demand delivery of the show is cancelled. Under consideration whether to continue the program under a new moderator or for cancellation.
ZIP! – His name was removed from the official website
TOKIO Kakeru – 25th broadcast cancelled
Tetsuwan Dash! – wil re-edit broadcast content which included Yamaguchi

I deeply apologize to the victim and to the victim’s family who I’m sure is feeling a lot of anger. Even if a settlement has been reached, the act committed by Yamaguchi Tatsuya as an adult, as a father of two children, can’t be forgiven. To all the fans who have trusted Yamaguchi, his co-stars and co-workers, I deeply apologize. As the leader, I feel ashamed. I would like for Yamaguchi to seriously atone for what he did.

The act commited by TOKIO Yamaguchi Tatsuya is absolutely not permissible, and above all, to the victim, TOKIO members deeply apologize. To related parties and people who supported TOKIO, I deeply apologize.

To all the fans …
I apologize for causing concern regarding TOKIO Yamaguchi Tatsuya, I am deeply sorry.

To all related parties, to fans, TOKIO member Yamgauchi Tatsuya has commited an inexcusable act and I sincerely apologize for the trouble caused. From now on, we will discuss with the member himself and think about what we can do. I am terribly sorry.