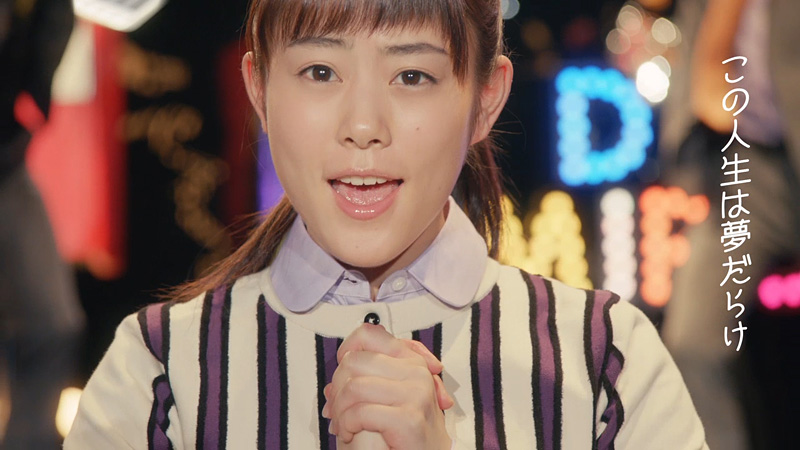 Japan Post Insurance (Kanpo Seimei) launched a new edition of its promotional campaign ‘Jinsei wa, yume darake’ (“Life is made of dreams”) on 1st March. Actress Mitsuki Takahata, chosen for the main character, sings about the wonders of life, dances and soars over an impressing Broadway-like stage. Music for the commercial is written by Ringo Shiina. Yuichi Kodama, one of the most recognizable video and ad creators, whose works include many of Ringo’s and Tokyo Jihen’s music videos as well as the acclaimed UNIQLOCK campaign for clothing brand UNIQLO, is directing.

Mitsuki Takahata is on the roll. She is currently starring in Getsu9 drama ‘Itsuka kono koi wo omoidashite kitto naite shimau darou’ and will be the next asadora heroine in ‘Toto Nee-chan’ (start: 4th April). Her romance movie ‘Shokubutsu Zukan‘ is also expected to be a big hit this summer. “As a former stage actress, I couldn’t hide my excitement when I saw the set” Takahata explained during official premiere of the campaign. Asked about her dreams she commented that one of them already came true when she became an actress. Her other dream for the future is to become… a mother. “I would like the viewers to be positive and keep looking for little wonderful things in life as we do in the world of the CM” she said. Mitsuki Takahata replaced another asadora actress, Rena Nounen, who was the CM character in the previous edition of ‘Jinsei wa, yume darake’ commercials.

The CM comes in 4 different versions – 15 sec. editions highliting the song and the message, 30 second and 90 second. Check them all below.