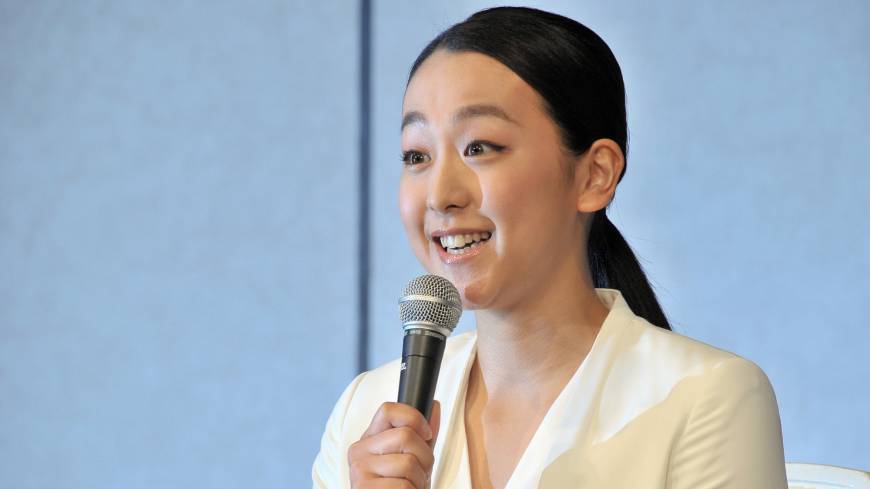 On Monday, Mao Asada announced that she was retiring from the world of competitive figure skating. Today, she made her first public appearance since the announcement at a press conference in a Tokyo hotel ballroom. Gathered in front of over 400 reporters, Mao reiterated that she is at peace with her decision to leave the sport she had dedicated her life to since the age of five, saying that she “had done everything” she could possibly do in her career.

Mao smiled as she spoke to the press. She originally thought of wearing a black suit, but instead chose to reflect her refreshed state of mind by wearing a white blouse and black skirt.

“I began figure skating when I was little and it gave me joy when I was able to do techniques I hadn’t done,” Mao said. “It was like, ‘I want to do a triple loop next.’ Those kind of things were fun. I don’t really have any bad memories, because this is the path I chose for myself.”

At the press conference, Mao revealed that she made her final decision to retire in February. This was after she had her career-worst showing at the Japan Figure Skating Championships in December, a competition which she had won six times, and medalled another five times, out of 14 entries.

Speaking of last year’s Nationals, Mao said, “I’ve always tried to perform without making mistakes and skate confidently. I wasn’t able to give a perfect performance and that frustrated me. I saw my score in the kiss and cry, and thought, ‘Maybe I don’t have to do this anymore.’ I’ve competed at the National Championships since I was 12, and I ended with the most disappointing result that I ever had. It factored into making the decision as one of the biggest reasons.”

Even though Mao said that she had no regrets in her retirement blog entry and at the press conference, she did reveal that there was one: not competing at the 2018 Pyeongchang Olympics. When she returned for her year-long hiatus in 2015, Mao made it her goal to compete at the 2018 Olympics. “I was conflicted because I announced my goal publicly and didn’t carry it out.”

Throughout Mao’s career, her rivalry with South Korea’s Yuna Kim was a hot topic. Yuna won the gold medal at the 2010 Vancouver Olympics, with Mao placing second. When asked about Yuna, Mao said, “We competed with each other since we were about 16 years old. We really inspired each other and I think we shook up figure skating together.”

What are Mao’s plans for the future? She doesn’t have any solid ones, but she will appear at an ice show in Osaka in July.

The press conference ended with Mao standing up and again thanking her supporters. She almost cried, but regained her composure. She left on a positive note, saying “Not forgetting what I’ve done in my skating career, I would like to find a new goal and move forward with a smile on my face.”