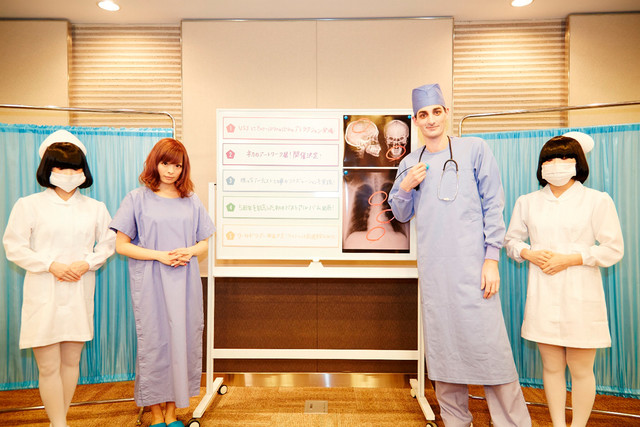 A few days ago, Kyary Pamyu Pamyu released a video showing her being taken to the hospital in an ambulance. When she arrived at the hospital, she was prepped for surgery. The outcome of the video was revealed today in a live press conference on LINE. As was thought by some when it was first announced, the press conference dealt with Kyary’s plans for her fifth anniversary in the music industry.

The first point is her first best album. The album will be released on May 25 and is currently untitled. It will include many of Kyary’s songs, beginning with 2011’s “PONPONPON” and ending with some new songs that will have CM tie-ins. The limited edition of the album will have a realistic replica of Kyary’s face as the packaging. This best album will also have a worldwide release.

The second point is Kyary’s third world tour. It will start in May in Singapore, and then continue on to the United Kingdom, Australia, the United States, and Taiwan. The tour will end in Japan with 2 concerts at Nippon Budokan on August 19 and 20. Exact dates and locations for the international shows are to be announced.

The fourth point is Kyary’s first artwork exhibition. Kyary is a very visual artist and this exhibition will display the covers of her various releases over the first 5 years of her career.

Kyary has also opened a special site in honor of her fifth anniversary. Visitors to the site can learn about the 5 point plan there, as well as look back on her career. In the future, the site will have interviews with Kyary, as well as a logo design contest. Check out the English version of the site here.

At the press conference, Kyary also spoke of how fast the past 5 years have went by. She said that she likes to challenge herself  and that she sees her plans for her fifth anniversary as raising her ambitions. She wants to show the world how “genki” Japan is and wants to continue to be flashy. She looks forward to this anniversary year as being an exciting one.