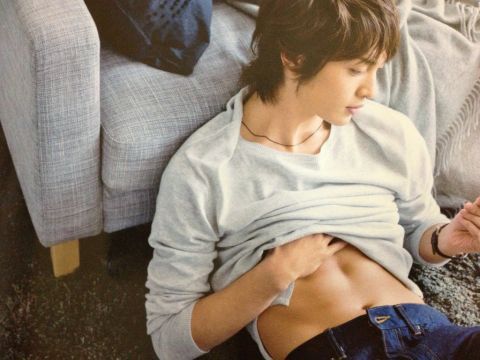 The “Love and Sex” issue of anan is a popular yearly edition. Year after year, desirable male stars strip off their clothes to tantalize readers. Past issues have featured sexy photoshoots from the likes of Yamashita Tomohisa, Sakurai Sho, and Kimura Takuya. This year’s issue will feature Kis-My-Ft2 member Tamamori Yuta. He’s following in the footsteps of his groupmate Fujigaya Taisuke, who was featured in the 2013 edition. The full group was featured in a sexy anan spread late last year.

Yuta’s photoshoot has the theme of a sensual day spent in a hotel room. In the magazine, out August 7, Yuta can be seen in bed and in the shower. To prepare for the shoot, he spent the past few months training his body. Three days before the shoot, he went on a minimal diet. These efforts resulted in six pack abs and a firm butt. Check out the preview picture after the jump!