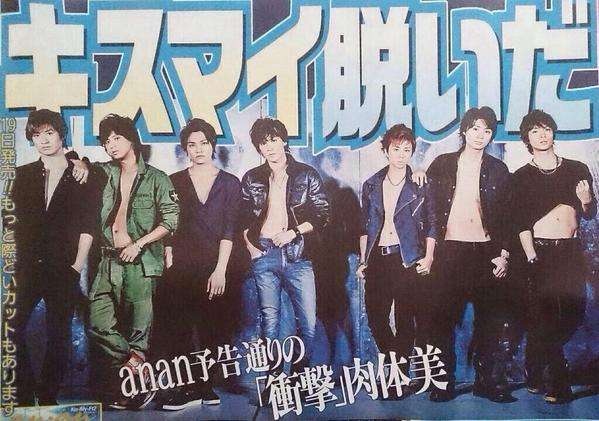 On the 15th, it was reported that popular group Kis-My-Ft2 will all be appearing in the issue of “anan” to be sold on the 19th, taking on the challenge of a semi-nude photoshoot.

The special feature will be of the popular photo collection that always boasts high sales called “Otoko no Karada” [lit. Body of a Man]. Up until now, the likes of Arashi’s Sakurai Sho have graced the magazine in the same special feature, but in an advertisement in the current issue of anan, it has been reported that one of the talents that feature in the magazine will have a “groundbreaking” spread, leaving the female readers to wonder “Who’s going to take it off?”

The 7 members will take on a 12 page color graveur spread. Fujigaya Taisuke has already revealed it all in a nude spread but this will be the first time that all 7 will be removing their clothing. They have each done courses of individual training and have even been stoic about not eating meals while in the midst of the photo shoots. Tamamori Yuta stated “I want to create a body with which I can undress at anytime and not feel embarrassed,”showing his professionalism.

They delved into various theories of the flesh, with Fujigaya saying “It is important to have a body with the type of flexibility that can correspond with any type role that comes [my way].” Nikaido said, “I want the kind of body of the people who wore roller skates and skated in the 70’s and 80’s.”

The one photo that was publicized is only a “sneak peak” but a person associated with anan says “There are more risqué cuts.” It is said that in this single graveur that you will see bodies that will make your heart race.

Here is a sneak peak! 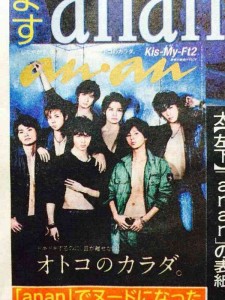