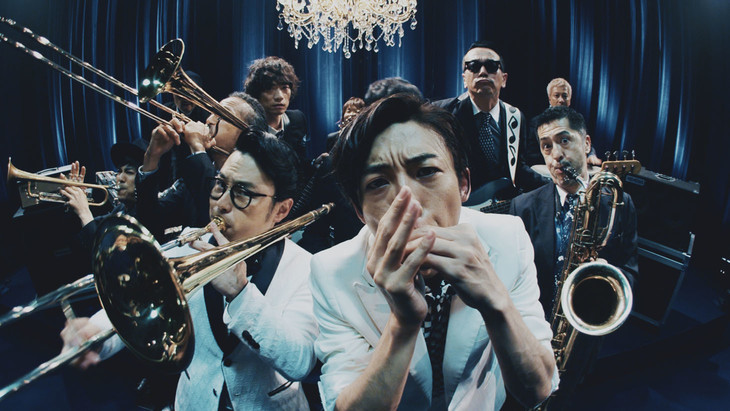 Issei Takahasi has been selected as the spokesperson for Kirin Beer’s alcoholic beverage “ICEBOX”. In the CM he’s joined by fellow actor Kenta Hamano.

Clocking in at one minute and 48 seconds long, it can arguably be described as a short MV instead. The CM takes place in a swanky looking club where Issei and Kenta are jamming out. Issei is on the harmonica while Kenta is playing the trombone. The supporting band in the CM is actually Tokyo Ska Paradise Orchestra, a very influential ska and jazz band who was without a doubt helped shape the modern Japanese music scene. Their many collaborations include Shiina Ringo, PUFFY, Kyoko Koizumi, and Tamio Okuda. At the end of the performance Tokyo Ska Paradise Orchesstra and Kenta all watch in awe as Issei enjoys a refreshing sip of “ICEBOX”. A short 30 second version which will most likely be used for national television features Issei and Kenta, after taking a sip it transitions to them performing with Tokyo Ska Paradise Orchestra.

Both Issei and Kenta commented on how much fun it was to film the CM, both of them are also big fans of Tokyo Ska Paradise Orchestra. Issei has actually played the harmonica as a hobby for quite a long time, so he was happy that he could showcase his skills to the public. Kenta also plays the trombone, but as a profession too! He’s a member of the group Sakerock who also features popular actor Gen Hoshino. Besides trombone Kenta performs scat singing for the band.

Issei is currently enjoying success as one of the top actors in Japan. His next project is the film “Uso wo Aisuru Onna” where he will be co-starring with Masami Nagasawa. Kenta will be appearing in the highly anticipated “Tokyo Ghoul” film where he will play the role of Enji Koma.

Watch the full version of Kirin’s “ICEBOX” CM, as well as the 30 second version below!