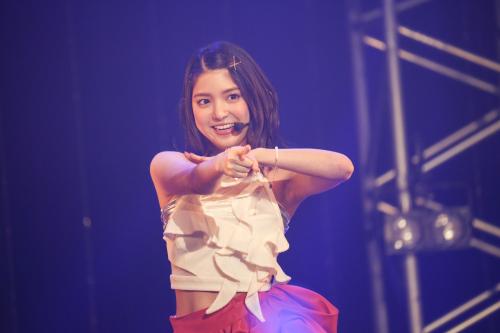 During the Tokyo stop in the Sakura Cloud9 tour, it was announced that Umika Kawashima of the idol group 9nine, will be graduating from the group in July. The reason being her wanting to pursue acting. It’s been on her mind for the past two years and now after making her decision, she is ready to for the next phase in her career.

Read more on what she has to say after the jump!

Ever since performing at the Budokan two years ago and feeling so accomplished, I’ve been seriously thinking about my future. I thought I was doing things halfheartedly in pursuing my individual activities while continuing with the group. I couldn’t leave things as they were. I’m still inexperienced in acting and lack confidence. When I asked myself what it was I wanted to do the most, the answer was acting. I’m nervous but I’m going to hit the ground running, putting all the things I’ve learned and accomplished with 9nine, to good use. I am nothing but grateful to the people who supported us until now. From this point on, I will do my upmost best to earn your support once again.

9nine announced they would be releasing a new single called AiAiAi on May 3rd. This will be her last tour and single with the group. Her final performance with 9nine, will be at the Tokyo Nakano Sun Plaza on July 23rd.