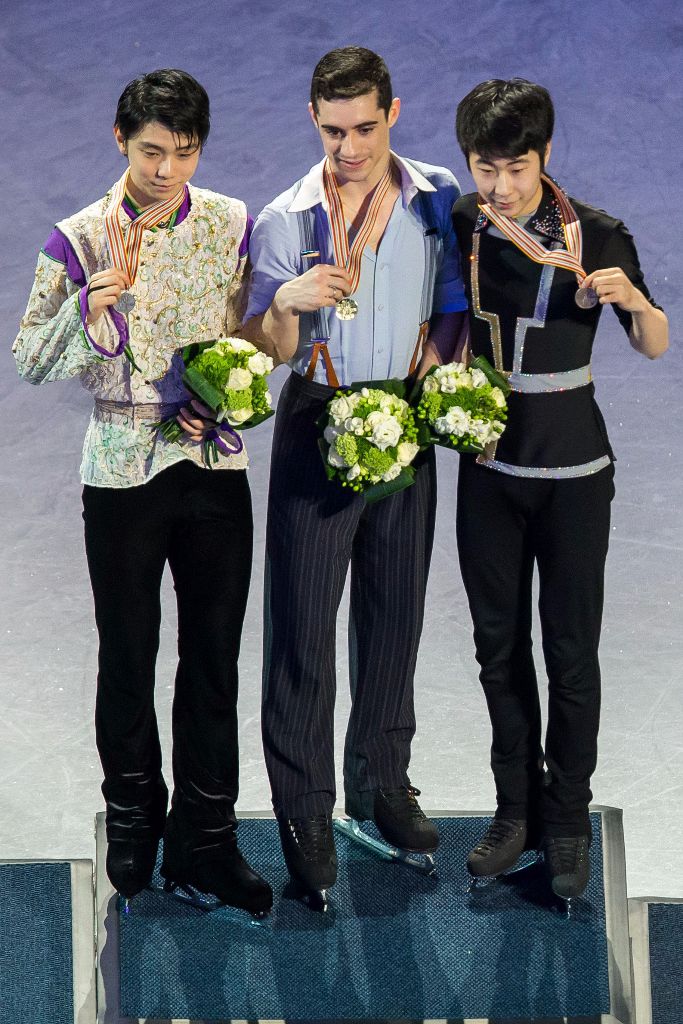 From March 28 – April 3, this year’s World Figure Skating Championships took place in Boston, Massachusetts, United States. Yuzuru Hanyu took second place. He was Japan’s only medalist this year. This is the first time since 2005 that a Japanese female skater hasn’t medaled at Worlds.

Yuzuru came in second place, with a total score of 295.17, 19.76 points behind Spain’s Javier Fernandez. Yuzuru won the men’s short program with a score of 110.56, 12.04 points ahead of second place finisher Fernandez. “My standard has been rising — I do feel the pressure,” he said. “But it doesn’t really affect my performance. I want to really enjoy my skating, and I think I was able to show that today.”

Two days later, Yuzuru’s messy free skate was given a score of 184.61, the second best of the night. A hand touched down on his opening quad salchow, and the mistakes kept coming. Yuzuru fell on his second quad salchow, costing him the points of a combination. He stepped out of his landing on his second triple axel, resulting in just a double salchow instead of a triple in the combination. Then a hand touched down again on his final jump, a triple lutz. “It’s regrettable. I was nervous,” he later said. “I wanted to jump all my jumps, but in the end it turned out to be a mistake. There are a lot of things I need to reconsider.”

The second Japanese male at the competition, Shoma Uno, came in seventh place, with a total score of 264.25. He finished in fourth place after the short program, with a score of 90.74. His free skate was the sixth best of the night, garnering a score of 173.51.

Satoko Miyahara was the highest ranked Japanese female skater, coming in fifth place with a total score of 210.61. Her short program was ranked sixth, receiving a score of 70.72. Two days later, her free skate was the third best of the night, receiving a score of 139.89.  After the free skate, Satoko said, “I am a little bit disappointed with my position in the standings but I am pleased that I was able to perform without making any mistakes. Even when I enter the offseason I want to improve by practicing hard.”

Mao Asada finished in seventh, with a total score of 200.30. Her short program was given a score of 65.87, placing her in ninth. Mao had been training with discomfort in her left knee and was in less-than-stellar form, her coach, Nobuo Sato, said. “It’s difficult for her,” he said. “She’s not completely fit, and is running on empty.” Mao under-rotated the opening triple axel and landed on her hands. She hadn’t been executing her trademark element to her usual standards in practice. “I wasn’t sharp enough on the triple axel, which is too bad,” said Mao. “But I thought I skated as well as I could the rest of the way. It is what it is. I have to accept everything that comes at me.”

Mao’s free skate was given a score 134.43, seventh best. “I’m relieved. There are more things that have not been going well than have, but today I can give myself a break and I am satisfied with the way I performed,” she said. “If I had not come back (after sitting out the 2014-2015 season) then I think I would have regretted it. In my own way I want to make use of this experience step by step in what I do next.”

The third Japanese female at the competition, Rika Hongo, came in eighth place, with a total score of 199.15. She finished in seventh place after the short program, with a score of 69.89. Her free skate was the eighth best of the night, garnering a score of 129.26.

Pairs skaters Sumire Suto & Francis Boudreau Audet’s short program was ranked in last place out of 22 paris with a score of 38.50. They did not advance to the free skate.

Due to the success of Yuzuru and Shoma, Japan regained its third men’s spot for next year’s Worlds.

This year’s World Championships weren’t without controversy though. This year’s event was held in the US, a country which used to dominate figure skating but has since lost its status. Going into Worlds, no American woman had medaled at Worlds or the Olympics since 2006. Since the event has being held in the US, there were hopes that that drought would come to an end. It did, in the form of Ashley Wagner taking second place. Some feel as if she was undeserving of the medal, and that Satoko Miyahara, last year’s World silver medalist, should’ve been on the podium instead, seeing as how she skated 2 nearly flawless performances, while Ashley did make some mistakes.

It’s been reported that something was amiss after the short program, which American Gracie Gold won with a score of 76.43, 2.45 points ahead of second place, Russian Anna Pogorilaya. After Gracie had mistakes in her free skate, it suddenly was Ashley Wagner that people were looking to to end the US medal drought. She did this despite under-rotating two of her jumps and not landing a clean edge on another in her free skate.

Meanwhile, Satoko skated cleanly and by many accounts had the most impressively interpretative program of the night, but somehow ended up with a program component score (which focuses on skating skills, transitions and artistry) that was more than seven points lower (73.78 to 66.35) than Ashley.

If those scores had been flipped, Satoko would have ended up with her second straight silver medal and Ashley would have been sixth.

Many skating experts praised Satoko’s free skate, including Olympic and world champion ice dancer Charlie White, who worked Worlds for icenetwork.com and made it clear in his analysis that he also thought Satoko’s PCS scores were too low.

But there was an odd comment from Tara Lipinski, the Nagano Olympic gold medalist, who worked as an analyst for NBC for the event. During Satoko’s free skate she said, “. . . She’s a dark horse for the podium.” This is an odd comment, because who would deem the reigning world silver medalist as a “dark horse?”

Comments like these just added to the feeling that results were predetermined — that there was going to be an American woman on the podium one way or the other.

The kind of nonsense that happened in Boston is exactly what is wrong with skating and why many people refuse to take it seriously.

Neither of those reasons are legitimate ones for underscoring one skater and overscoring another. Behavior like this makes skating look so parochial — just like it did in Sochi.