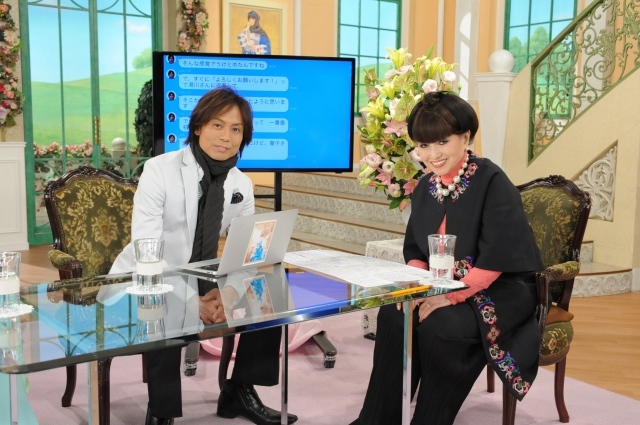 Music producer Tsunku will appear on “Testuko no Heya” for the first time in 11 years.  Tsunku had his vocal cords removed last year as part of his treatment for laryngeal cancer.  On the show, he communicated with Tetsuko Kuroyanagi by writing on a computer.

“I can’t 100% say that ‘happy’ is the correct way to describe how I feel,” he honestly revealed, but he also appeared optimistic, adding, “I think living is worthwhile” and “I want to find what I’m capable of, and share it with everyone in the world.”  His episode will be aired on the 21st of this month.

In the fall of 2014, Tsunku had to choose between his life or his voice.  For Tsunku, losing his voice would be an unimaginable blow as he was also a singer.  However, Tsunku decided to choose the path of life.  Last April, he attended the entrance ceremony at his alma mater Kinki University and officially announced losing his voice.  Since then, he has slowly resumed his activities in music, leading to this television appearance.

This time, Tsunku’s responses were displayed on a monitor set up in the studio.  He talked about his post-surgery lifestyle, and how at one point he lost weight due to food not going through his throat.  He also sometimes mixed gestures and smiles as he talked to Kuroyanagi about his wife, who seemed quiet during the time of their wedding, but is now strongly supporting him and their children.

“This was probably the first time since his surgery to take part in such a long recording using a computer like this.  I’m sure it was very tiring,” Kuroyanagi commented. “Despite this, he properly spoke a lot about himself and his feelings, and I truly appreciate that.  I’m very glad he visited.”