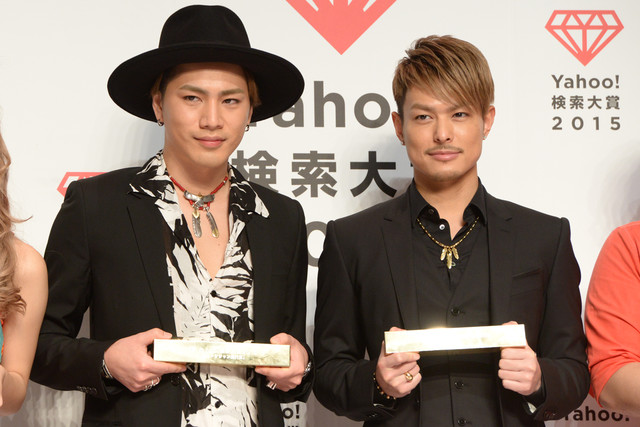 Today, this year’s edition of the Yahoo! Search Awards were held at Tokyo’s Toranomon Hills. These awards are given to people who had the biggest increase in their Yahoo searches compared to the previous year. The winner of the Grand Prize this year is Sandaime J Soul Brothers. Their rapid rise in searches is result of their hit album “PLANET SEVEN” and their successful tour which was attended by over a million people. Sandaime J Soul Brothers also took home the Musician Award. The group’s vocalists, Tosaka Hiroomi and Imaichi Ryuji attended the ceremony. Hiroomi was surprised and honored by the wins. Ryuji was happy about the wins and thanked those who supported them to make the wins possible.

The duo spoke a bit about their dome tour, with Ryuji saying that it had been a goal for Sandaime J Soul Brothers since their debut. Hiroomi commented that when he looked out on the audience during that tour, he realized how many people were actually listening to their music.  When asked by the host who they thought was the most searched for member, Hiroomi replied that it was probably Iwata Takanori. He ended his comments by saying that he hopes that Sandaime J Soul Brothers continue to grow in the future.

Check out the rest of the winners, as well as photos and video from the ceremony, after the jump!