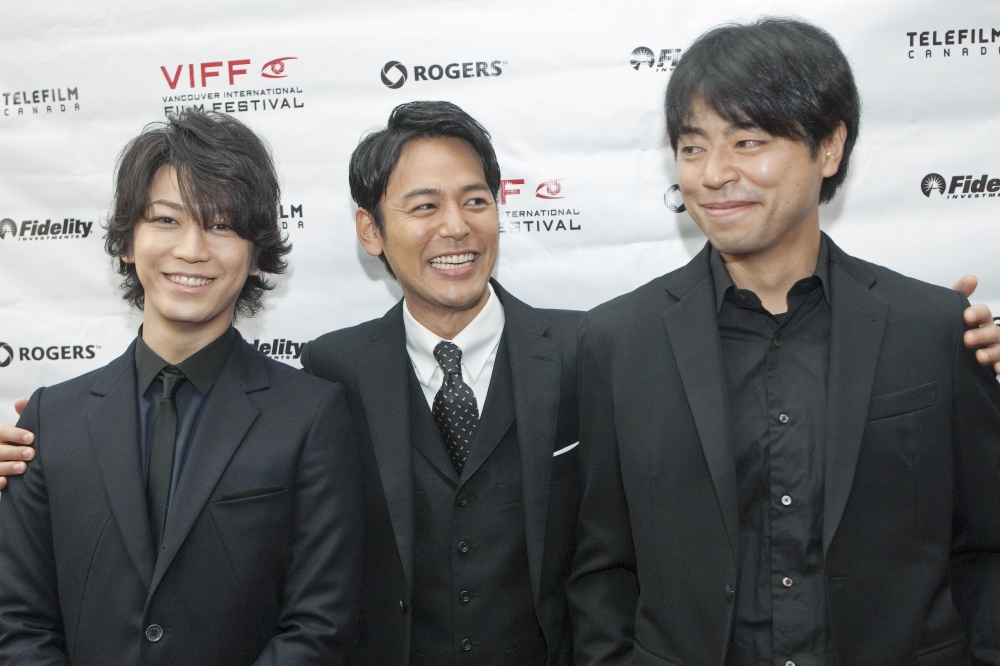 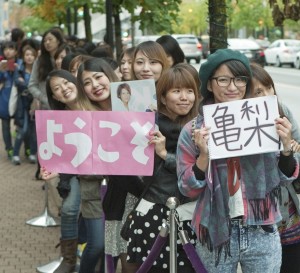 Fans championed through the poor weather to get a glimpse of their favorite Japanese actors at the Vancouver International Film Festival world premiere of the much-anticipated Japan-Canada coproduction “The Vancouver Asahi” (“Bankuba no Asahi”).

“The Vancouver Asahi” is based on the real life story of 2nd generation Japanese immigrants (played by Satoshi Tsumabuki, Kazuya Kamenashi, Ryo Katsuji, Yusuke Kamiji, Sosuke Ikematsu) living in Canada that played on the team of the same name back in the 1930s. As a team, they played within the local amateur baseball league. Although struggling with discrimination and poverty in their personal lives, the team grew in popularity due to their fair play spirit.

Filming for the movie began in February of this year and finished in April. Filming took place in Ashikaga, Japan where they recreated Vancouver in the 1930s on an open set. All the principle actors previously listed have experience playing baseball, except actor Satoshi Tsumabuki who went through training beginning in late 2013.

At the press conference that preceded the screening, Director Yuya Ishii said that he previously didn’t know about Japanese Canadian history and that neither do most Japanese people. He wanted to show how these people persevered survived, and rose above the challenges they faced daily at the time without depicting them as victims lost to history.

The stars took the the stage and spoke in both English and Japanese. Ensemble star Satoshi Tsumabuki expressed his admiration for Nikkei (people of Japanese descent) living abroad, saying his impression was that the Japanese people in those days were “really, really strong and that their strength came to the fore.”

Unlike Tsumabuki, who had no baseball experience prior to signing on to this film, Kazuya Kamenashi played baseball his whole youth until high school and provided a great wealth a knowledge during shooting. For the film’s historical accuracy, he reveals that they studied archival film footage from the time to learn how they played back then.

Arisa Meirin has submitted a guest piece reviewing the event:

Ishii Yuya’s new film, Vancouver no Asahi (The Vancouver Asahi), premiered at the Vancouver International Film Festival (VIFF) last night. Hundreds of fans lined up outside The Centre in Vancouver for Performing Arts hoping to get a glimpse of the director, Ishii, and leading actors, Tsumabuki Satoshi and Kamenashi Kazuya, as they posed for the media before the screening. Inside, the trio introduced the film to the sold-out venue of 1800, citing how moved they were to be premiering the movie on the very soil where the Vancouver Asahi played. Fans of Kamenashi and Tsumabuki had nothing but cheers to offer as the two gave their best shots at English greetings, which seemed markedly improved, possibly owing to the handful of English lines they rehearsed for their feature film. 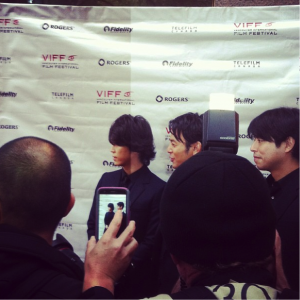 Not many people could have outshone Kamenashii, Tsumabuki or Ishii, each huge stars in their own right, but it was the last guest to be introduced to the stage that stole the show. Kaye Kaminishi (91), portrayed by Katsuji Ryo in the film, is the sole living member of the former Vancouver Asahi baseball team. Joining the team as a rookie in 1939, Kaminishi stayed with the Asahi until their forced disbandment as a result of the Japanese Canadian Internment of 1941 – Canada’s response to the pearl harbor bombing. At the time, the Asahi were at the height of their glory, having won multiple tournaments and titles, bringing hope to the oft-oppressed Japanese Canadians of Little Tokyo. Though they vowed to play again someday, the team of dreams never reunited. And yet, the story of Kaminishi and his teammates lives on; in 2003, the Asahi were inducted into the Canadian Baseball Hall of Fame and now, 100 years after their formation, their story has been taken to the screen for the world to see.

The cast of the Vancouver Asahi was studded with stars of leading-bill caliber – Miyazaki Aoi, Yusuke Santamaria, Sato Koichi, among others – in roles that could have seemed almost too small for their resumes had they not brought to them such subtle vibrance. The crowd reveled in the film, laughing, crying and clapping along with the characters on screen. The credits rolled to a standing ovation of thunderous applause. I have always seen a parallel between the high jump and Japanese films. They’re a long build up for an often short, but unforgettable, main event. At over 2 hours long, Vancouver Asahi stays true to this form. But the performances, featuring a guest appearance from Kaye Kaminishi himself, and story make it well worth it.

It should have been hard to get more emotional than the parting scenes that closed the film, but it was the site of Kamenashi and Tsumabuki hushing the crowd that pulled on heartstrings not quite like anything else. The reason? So that the final words of Kaye Kaminishi, who appeared in surprise post-credits clip, could be heard.

Check out the news coverage of this event at Straight, Vancouver’s online news source: here and here.

Thanks Sya and Cherry.Ayuri for the tip and Arisa Meirin for the guest contribution and photo!