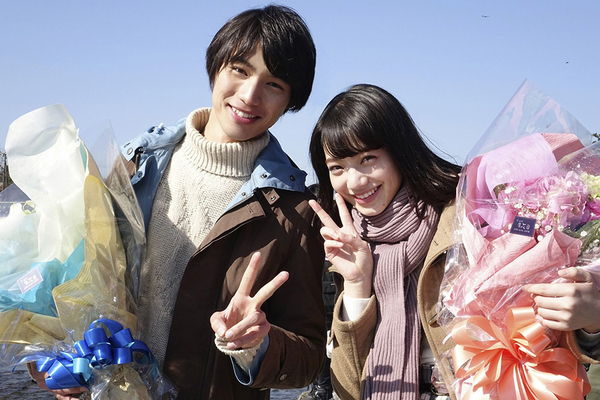 Sota Fukushi and Nana Komatsu finished filming for their new movie “Boku wa Ashita, Kinou no Kimi to Date Suru (Tomorrow I will Date With Yesterday’s You)”, in which they co-star together for the first time as lovers.  The film will be released in December this year.  Fukushi commented, “I hope that our genuine enjoyment can be communicated through the screen.” Komatsu, who said she cried while reading the original novel, showed tears again as they wrapped up filming.  “I initially struggled with the role, but now I wish I could do another date scene again,” she said.

The story depicts a love story between a 20 year old man and woman who are both burdened with unfortunate fates.  Filming began in the middle of January, and Fukushi and Komatsu stayed in Kyoto for approximately 1 month where the story takes place.  Scenes were filmed inside of Eizan trains and stations within Kyoto, as well as at many scenic tourist spots such as the Kamo River, Fushimi Inari Shrine, and Sanjo Ohashi.

When asked about their impressions of each other, Komatsu replied, “At first I thought he was quiet and not talkative, but after actually speaking to him, I realized he was easy to talk to.  We’re both the youngest sibling in our families, so there were many times where we understood each other’s stories.  He’s fun to talk to but also natural and reliable, and I think he’s a calm person.” Fukushi answered, “Before I met her, I had the impression that she was cool-headed and didn’t talk much, but once we met and talked, I saw more and more of the real Nana Komatsu,” he added with a laugh.  “She talks a lot, and she’s friendly.  We understand a part about each other because we’re both the youngest siblings.  She was pretty unexpectedly different from my first impression.”