Earlier in July, it was announced that Sakisaka Io’s popular shoujo manga Strobe Edge will be getting a live-action film adaptation. Soon after, casting rumors has surfaced. It was confirmed today that Fukushi Sota and Arimura Kasumi are cast as leads for the movie. Fukushi will play the story’s cool school idol, while Arimura cut her hair by 20 centimeters (about 8 inches) into a bob to play the heroine.

Both got their huge break by appearing in the drama ‘Amachan’. This is their fourth time working together having also worked previously in dramas ‘Starman’ and ‘Yowakutemo Katemasu’, but this is the first time they will appear together in a movie.

Fukushi Sota will play Ichinose Ren and Arimura Kasumi will play Kinoshita Ninako. The story centers on a pure and obedient high school girl Kinoshita Ninako. While having noticed her classmate Korenaga Daiki is in love with her, she can’t be sure of her true feeling. One day she encounters Ichinose Ren, the most popular boy in school, in a train on her way home. Being with him, she starts feeling something never happened before in her mind. Is this true love?

Director Hiroki Ryūichi began filming the Strobe Edge movie in January in Niigata Prefecture, and the film will be released in Japan in March, 2015. 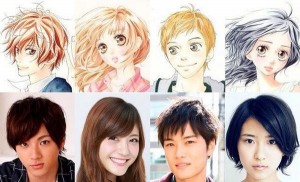