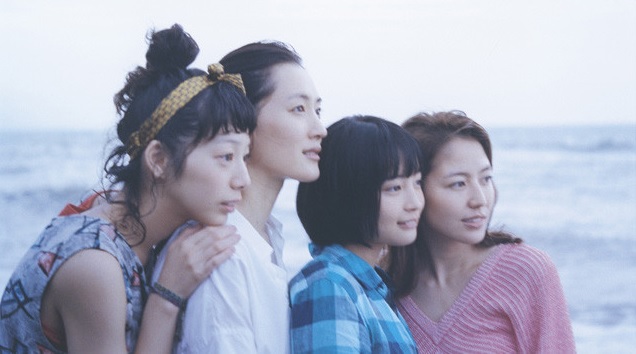 Ayase Haruka plays Kouda Sachi, the eldest daughter, Nagasawa Masami as Yoshino, the second daughter, Kaho as Chiika, the third daughter and Hirose Suzu as their youngest step-sister Asano Suzu. The movie follows three sisters who learn that their father, who abandoned them when they were young, has died. The oldest sister (Ayase) refuses to go to his funeral, because she is the only one able to remember him and cannot forgive him, but she sends her two younger sisters to his funeral. There, the two sisters meet their younger sister (Hirosue) and, eventually, they all begin to live together.

Other cast include Otaka Shinobu as the three sisters’ mother who live apart from her daughters, Tsutsumi Shinichi as Sachi’s boyfriend working in the same hospital as her, separated from his wife but has not been divorced yet, Kase Ryo as Yoshino’s superior working in the same bank as her, Fubuki Jun as the restaurant owner, whose place is frequented by the three elder sisters, Lily Frankie as the master of a cafe, Maeda Oshiro as plays Suzu’s classmate, Suzuki Ryohei as the coach of their school’s soccer team, and musicians Ikeda Takafumi and Sakaguchi Kentaro.

This is the first time Ayase Haruka and Nagasawa Masami are co-starring together. The movie is slated for released on June 13, 2015.