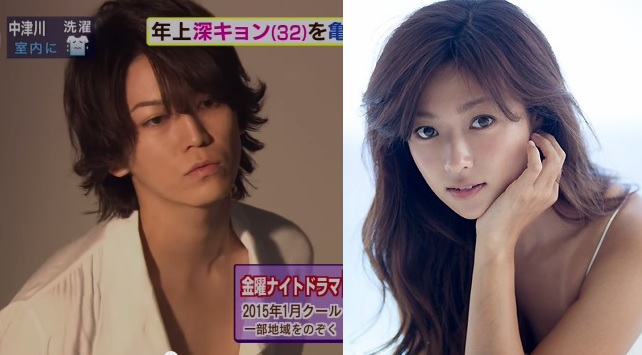 Before their team up can be seen in the upcoming movie Joker Game, we’ll get to see them first in a new drama series. It was announced that Kamenashi Kazuya will be starring with Fukada Kyoko in TV Asahi’s Friday night drama “Second Love” starting January 2015.

Written by romance drama expert Oizhi Shizuka, Kamenashi and Fukada stars in this scandalous new genre called “night melodrama”, an adult dangerous love described as more painful than a soap opera. With “adult love story” as theme, the story depicts their love journey with many differences such as age, living conditions and values.

Kamenashi Kazuya plays the role of Taira Kei, a young man who dreams of being a contemporary dancer while being earnestly in love with an older woman. Kei has a talent for contemporary dance since he was young and went to study in Germany to join a dance company in his teens. He has won several international competitions and was referred to as a “prodigy”. However, he encountered a setback in the middle and got frustrated. He returned to Tokyo and takes a part-time work while he tries to re-capture his dream.

Fukada Kyoko, plays Nishihara Yui, a Chemisty teacher in her 30s, working at a prestigious high school. Even while continuing a love affair with a married colleague, she was still lonely until she meets Kei and gets swallowed in passion.

This is Kamenashi’s first drama on TV Asahi.

Kamenashi comments “When I look at my photos, I never felt my sex appeal. So when my appearance on this adult love story was decided, I asked “Are you okay with me? “ (laughs). Nevertheless, he won’t be shy now, and will devote himself to this melonight drama with an “adult world view” peeking at the intense love pattern of men and women. He wants to continue to do his best, he says wtih enthusiasm.