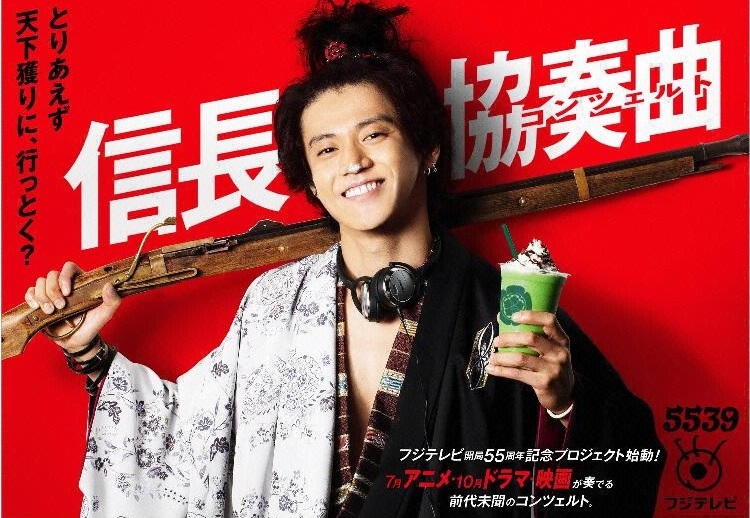 The poster for Shun Oguri’s new drama ‘Nobunaga Concerto’ has been posted on FUJI TV’s official website. Oguri is actually doing two roles for the drama. He is not only playing Oda Nobunaga, but also his modern counterpart Saburo. Saburo is an ordinary high school student who travels back in time to the Sengoku era. He is asked by the real Oda Nobunaga, who looks identical to him, to trade places with him.

The drama will air in October. The tv adaption of Ayumi Ishii’s historical manga will be followed by a movie. Shun Oguri will also be reprising the role for the film.

Oda Nobunaga is Saburo (Shun Oguri), an ordinary high school student who travels back in time to the Sengoku era. The young samurai of the Oda family which is merely a minor feudal lord, set out towards the extraordinary dream of unifying the whole country through the power of Saburo. Saburo, a person from modern times who has no experience killing people, does not understand the willingness of the warlords of the Sengoku era to lay down their lives for their family. It is the same for the vassals too. They have had a hard time understanding Nobunaga’s actions ever since Saburo took over. Despite this “generation gap across space and time”, they are soon on the brink of achieving their dream …