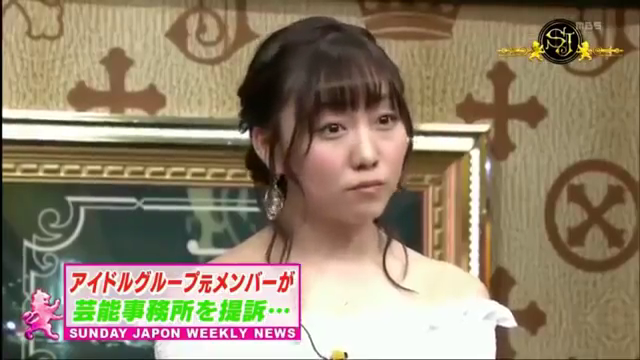 Akari Suda, the leader of Team E of SKE48, made an appearance on variety talk show ‘Sunday Japon’ on Nov, 19. The topic of the segment Suda was in was about the four idols who had sued their agency for unpaid wages. The D-topia controversy was previously covered here.

When Suda was asked to comment on the incident, she surprisingly didn’t have that much sympathy for the idols in question. She prefaced, “It’s maybe harsh but,” and continued, “you can’t be an idol if you want to make money.” She either suggested that making money shouldn’t be an idol’s main motive – or perhaps she confirmed that generally speaking, idols don’t make big bucks in the industry.

However, that wasn’t all she had to say. She also remarked that choosing the agency is the idol-to-be’s “own responsibility”, expressing her feeling that the girls now seeking justice in court had, in fact, messed up to begin with by joining the shady agency.

The hosts of the show, comedy duo Bakushou Mondai members Yuji Tanaka and Hikari Oota, tried to get her reveal her own salary. Smiling, she said it’s a secret and waved off the question.

The full episode can be watched on YouTube. The segment begins around 00:59 mark.