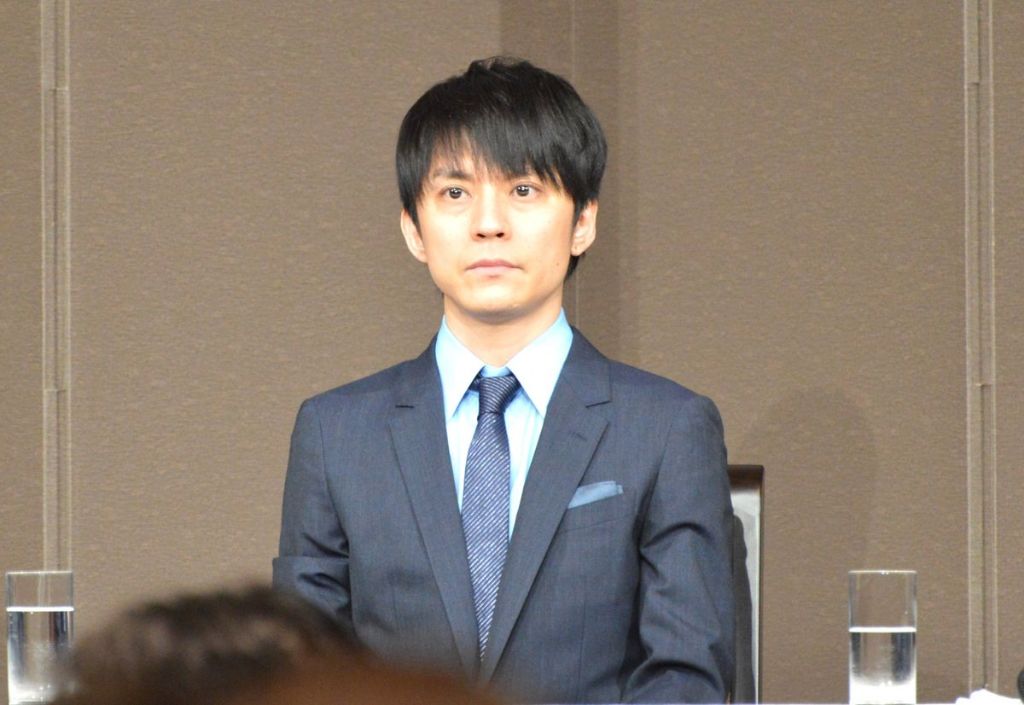 The rumor turned out to be true. Shibutani Subaru will in fact be leaving Kanjani8 and Johnny & Associates. In a statement to fan club members, he said that he was leaving to learn more about music and to progress as a musician, including going overseas to study music. The remaining members of Kanjani8 said in their statements that they respect his decision.

Subaru will not be part of Kanjani8’s dome tour this summer. His time with Johnny & Associates will end on December 31. 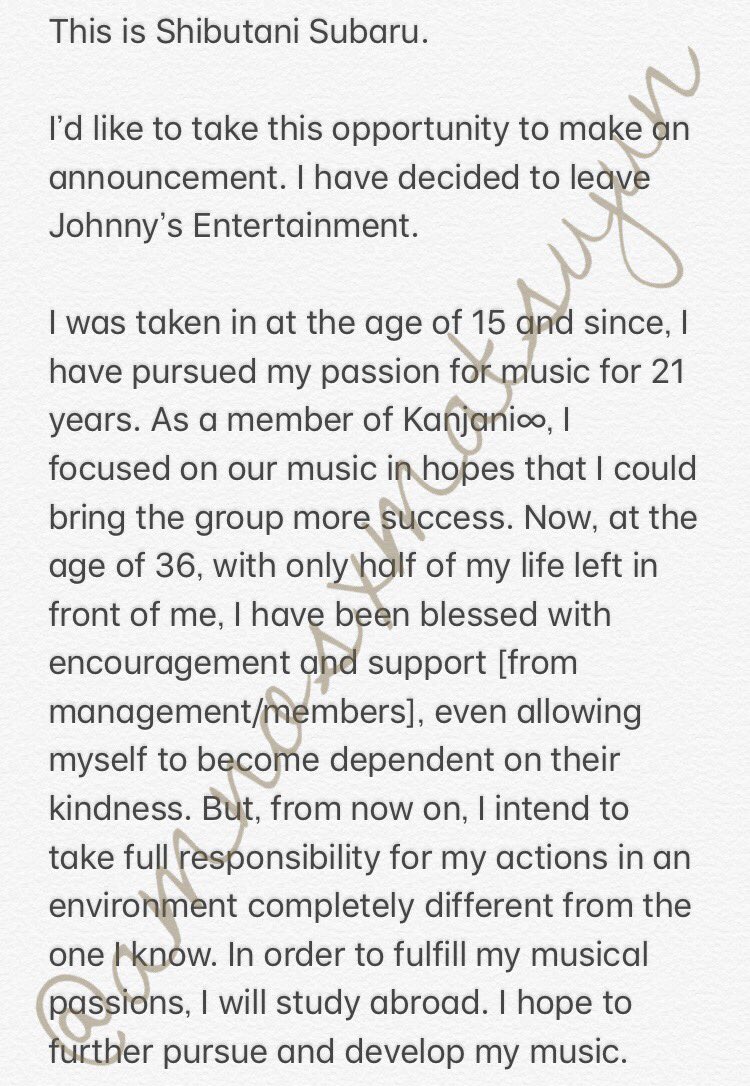 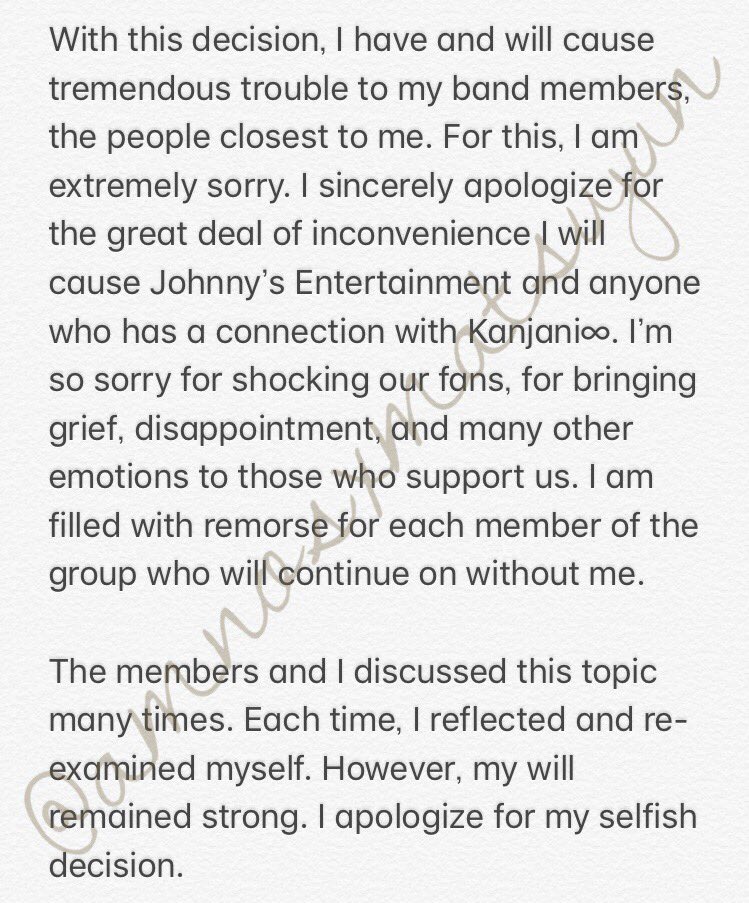 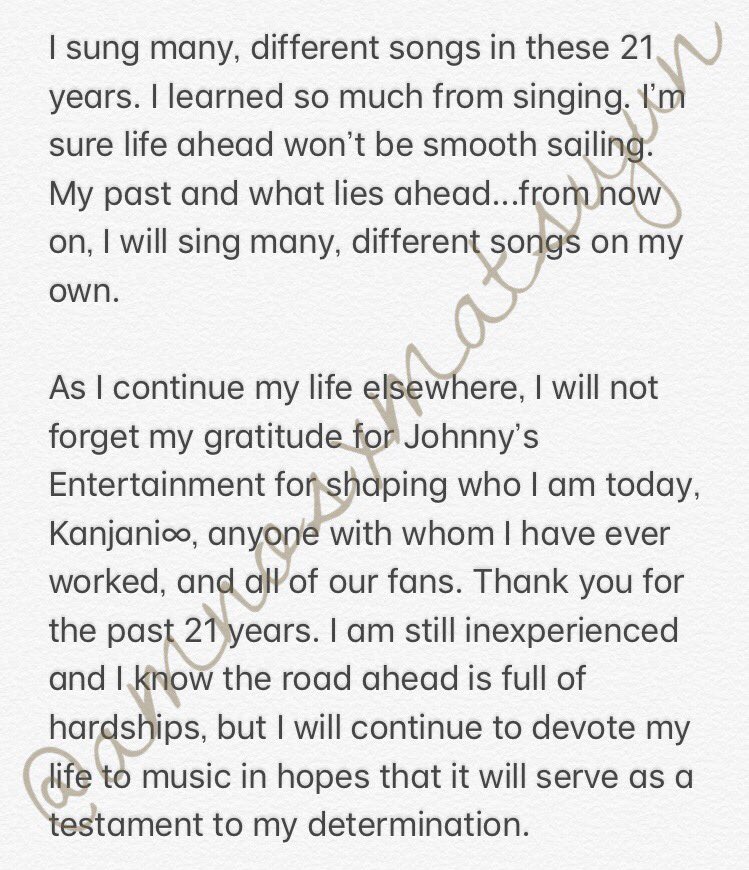 Statements by the other members, courtesy of @eryotic:

“Personally I think it’s too bad that it’s come to this but I respect this huge decision in one man’s life. This is quite sudden, I think people will be shocked. Whether this decision is right or wrong, we as the remaining 6 members of Kanjani8 & Shibutani Subaru will have to prove ourselves. I support the decision of this senpai who lovingly guided the 13yo me who knew nothing when I first entered the jimusho. Sorry for this one-sided report. From this new K8 &the Subaru who chose to walk alone, yoroshiku onegaishimasu.”
– Nishikido Ryo

“It feels sad and lonely that one of the members we’ve been doing this with together will be leaving. But it’s my first time to feel and experience this kind of reality where I’m not arguing(*thinking) sentimentally. Us & Subaru will go on. “I’ll be grateful if you can keep watching over both of us. We never thought this day would come – we feel the same as the fans. But we’re connected by one sky & even if our places change, our feelings will be connected. For Subaru&K8, yoroshiku onegaishimasu.”
– Maruyama Ryuhei

“Shibutani Subaru’s presence, songs and variety(*roughtrans) has been a huge support to Kanjani8. Undoubtedly it’s the same for those of you who’ve been cheering us on. He’s someone who can’t keep running just with his past experiences and half-hearted feelings, so I think his words & actions in whatever he does has weight. That’s why I also think this decision of his surely has a deep meaning. & that’s why there’s no time to be sad over this. I want to support with all my heart and mind the path he’s chosen to walk on. I look forward to the kind of Shibutani Subaru I’ll be seeing in the future. Itterasshai!** Running together with you has been the best, baibai!”
– Yasuda Shota

**itterasshai is what you say to someone who’s left but will come back.

“I liked playing drums from behind him. I liked his unique humor. I liked his kindness towards his companions. I liked his passionate words when talking about dreams. It’s an incredibly precious, wonderful thing to have your own dream. His dream may not be to be here with us, but if he can create something new somewhere else, maybe no one has the right to be stopping him. It’s sad and lonely, it’s too bad – we feel the same as everyone. But it’s not like Kanjani8’s 14 years of history will be gone. That’s definitely not a lie. “We’ll keep going on with precious memories. Wherever you will be, I hope your singing will touch people’s hearts.”
– Ohkura Tadayoshi

“Please forgive us for this sudden and personal announcement. I never imagined a life without Subaru by my side. When I first heard about this, my feelings didn’t well up. To be honest I thought it’s just a fleeting desire (from his side). However upon talking about this lots of times, I finally felt that the strength of his determination and his feelings were real. After being with him for 21 years, I understood just by looking into his eyes. From the first day of the upcoming tour, we’ll continue as 6 members. Even as 6 members we’ll do our very best and we’ll keep going on – we want to convey that to everyone who’s cheered us on until now. We’ll be starting from one. We’re sorry for making you worry, but from hereon, from K8, yoroshiku onegaishimasu.”
– Murakami Shingo

“We apologize for causing trouble to everyone at this time. Shibutani Subaru will part with Kanjani8 and leave the jimusho. With our 15th anniversary since our 1st CD debut coming up, we’re really sorry to be bringing this kind of news to the fans. I want to respect Subaru’s feelings as a man. But my honest feelings are – I want him to keep staying a member and friend. But he’s resolute and has decided on this. This is a life decision. That’s why I also decided to be resolute and move on. Subaru being in K8 has showed me a lot of things. Things won’t change even if he’s apart from the group. To the fans who support us, please look after both Subaru and K8 warmly from now on. Subaru, arigatou.”
– Yokoyama You