As previously reported, Kanjani 8‘s Shibutani Subaru gained quite a bit of negative attention after displaying bad behavior on a television show while promoting his movie, “Misono Universe.” After much criticism of the occurrence from the media and viewers alike, Shibutani issued a handwritten apology letter. 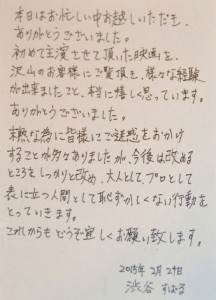 I am very thankful to have your time on this day while you are busy.

I am very happy to have so many people see the movie in which I had my first starring role. Thank you.

Because of my immaturity I have caused everyone a lot of trouble, but after this I want to thoroughly refine myself in the areas that can be refined, and as an adult, as a professional and as a person who stands in the public eye I will not do any more shameful actions.

Please treat me kindly from now on.