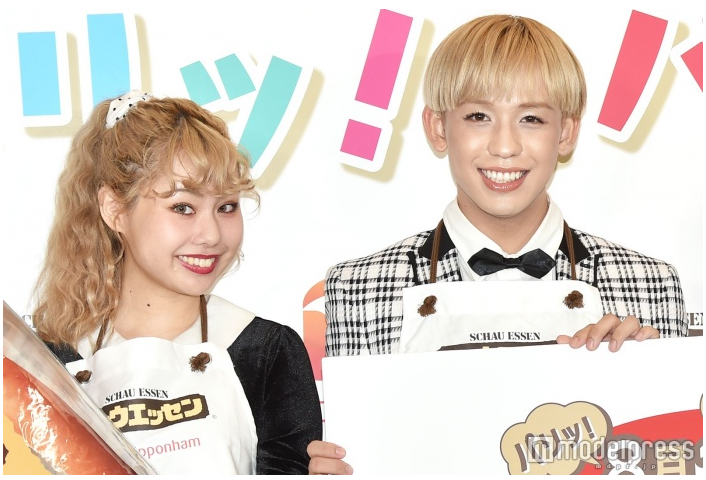 Talent couple Peco and Ryucheru have made headlines by sharing “cute” photos from their wedding ceremony. The couple previously announced that they had registered for marriage last year on December 31st.  The ceremony was held at a private location undisclosed to the public, three different outfits were worn by the newlyweds.

Starting out the couple wore traditional wedding outfits. Ryucheru wore a sleek black tuxedo with a white bowtie and corsage, while Peco went for a princess style wedding dress. The next set of outfits showcased the couples colorful and eclectic style. Going with the theme of “American retro style” Ryucheru donned bright yellow canary pants with a matching parasol, finishing the outfit with a white ruffled dress shirt. Peco wore a retro 40s/50s inspired dress and accessorized with a picnic basket and yellow trimmed hat. The final outfit saw Ryucheru wear a blue blazer with a piano print tie, and Peco with a pink poodle skirt with black polka dots.

The duo shocked the Japanese entertainment scene with the announcement of their marriage, Peco is 22 years old while Ryucheru is 21. The two originally met in 2014 while working at a clothing shop together. Within a month they had started dating, and only after 6 months they moved in together. They became popular on social media, eventually resulting in their nationwide stardom as talents. Since sharing the wedding photos, Peco’s tweet has been retweeted over 119k times.

It looks like a baby could be on the horizon for the two also, with them going so far as to have already picked names. On a variety show Ryucheru hoped to get the deed done by the end of the year. The couple currently covet the names “Mona” for a girl, and “Link” if it’s a boy.

Pictures from the wedding can be seen below!