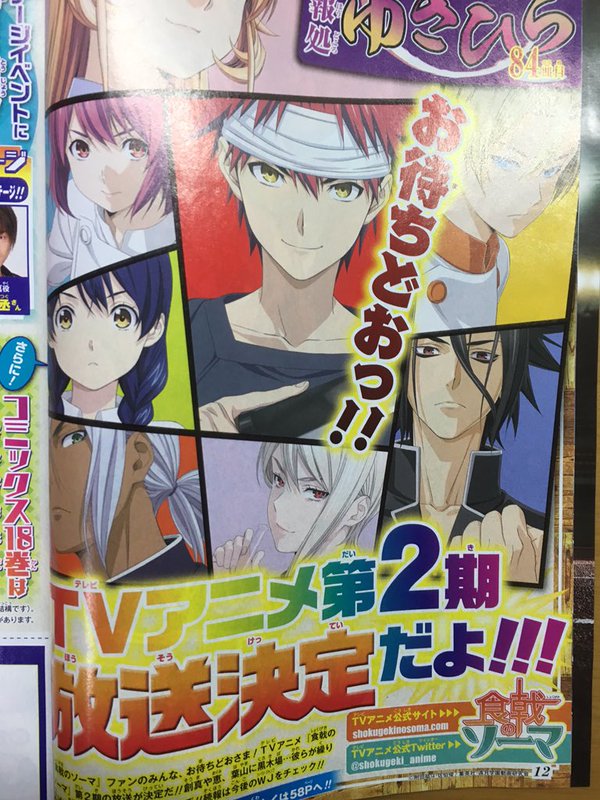 The latest issue of Weekly Shounen Jump revealed that Yuuto Tsukuda and Shun Saeki’s Shokugeki no Souma will receive a second anime season.

It is likely the same staff that did the first season will return to do the second.

If you are unaware of what the ecchi cooking series is about, here’s a summary.

Synopsis: Ever since he was a child, fifteen-year-old Souma Yukihira has helped his father by working as the sous chef in the restaurant his father runs and owns. Throughout the years, Souma developed a passion for entertaining his customers with his creative, skilled, and daring culinary creations. His dream is to someday own his family’s restaurant as its head chef. Yet when his father suddenly decides to close the restaurant to test his cooking abilities in restaurants around the world, he sends Souma to Tootsuki Culinary Academy, an elite cooking school where only 10 percent of the students graduate. The institution is famous for its “Shokugeki” or “food wars,” where students face off in intense, high-stakes cooking showdowns. As Souma and his new schoolmates struggle to survive the extreme lifestyle of Tootsuki, more and greater challenges await him, putting his years of learning under his father to the test. (MAL)