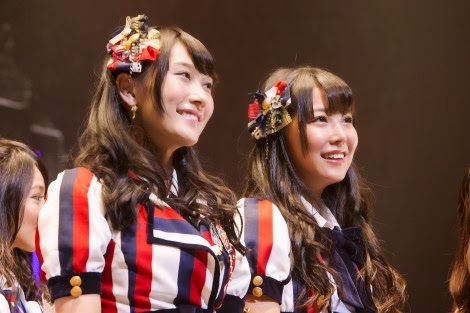 In the final night of their concert tour ‘NMB48 Tour 2014 in Summer, The centre of the world is Osaka ~Namba is autonomous!’ the senbatsu  members for the 10th NMB48 single were announced. The single is due to be released on the 5th of November, and the title is yet unknown.

However, the shocking news is that the proclaimed ‘Absolute Ace’ Sayaka Yamamoto is being replaced as centre, and instead Miru Shiroma and Fuuko Yagura will be the new ‘W centre’, forming a fresh new NMB48. 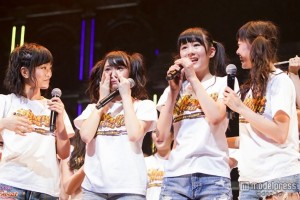 Being selected as centre for the first time, Fuuko exclaimed “Until now it was natural to be looking at the backs of Sayaka and Miruki (Miyuki Watanabe) and be pulled along by them, so from now to respond to expectations I will do my best with all of my power. I want to pull NMB48 together from now!’

Miru Shiroma commented happily “I have been given such a huge chance, so I am going to tightly seize it. I want to shine brighter than anyone else!”

The senbatsu members for the single are;