Last month we reported that popular rock band RADWIMPS would be releasing their ninth studio album on December 12th.  Now, as this date has drawn closer, the group have chosen to publish all of the information about the record on their website.

The album, titled “ANTI ANTI GENERATION,” comes just over two years after the release of their previous set “Ningen Kaika” and will include their already released tracks “Saihate Ai ni,” “Mountain Top,” “Catharsist,” a new mix of “Sennou,” and 13 additional songs for a total of 17.  Of particular note are new songs “IKIJIBIKI,” which features guest vocals from ONE OK ROCK’s Taka, “Nakidashisou da yo,” which features the same from rising singer/songwriter Aimyon, “TIE TONGUE,” which features both New York-based rapper MIYACHI and SOIL & “PIMP” SESSIONS member Tabu Zombie, and both “Banzai Senshou” and “Seikai,” which were performed at NHK’s 18 FES. earlier this year.

In conjunction with this announcement, the band also uploaded the music video for album track “Sokkenai” to their YouTube channel.  This PV was directed by Yusuke Ishida and stars both actress Nana Komatsu and young actor Fuuju Kamio as a couple that are both physically close and yet worlds apart.

Read on below to find not only this music video, but also the cover and complete track list for “ANTI ANTI GENERATION.” 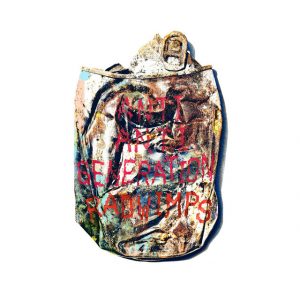