Rookie artist MACO, singer-songwriter from Hakodate, Hokkaido has released a new album (out 7/23), titled ’23’. MACO has made a name for herself by covering  songs by Western artists such as Taylor Swift, Katy Perry, and Ariana Grande and publishing it on youtube. Her version of Taylor Swift’s ‘We Are Never Ever Getting Back Together’ has so far gained over 5 million views.

Her covers though are not a direct translation of the English lyrics, rather they are her own interpretation into natural and rhyming Japanese, set to a piano backing track. For the new album ’23’, an album highlight medley was previously released previewing the 8 tracks which consists of  cover songs as well as original music.

In April 2014, she released her first indie mini-album “22”, which topped the Japan iTunes album charts. She was subsequently signed by Universal Music Japan.

Album tracklist and videos of her covers below the cut. More of her videos can be found at her official youtube account – MACO CHANEL 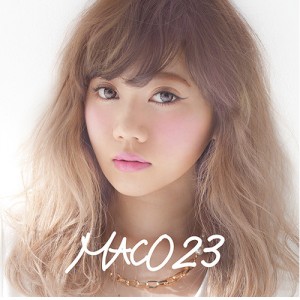