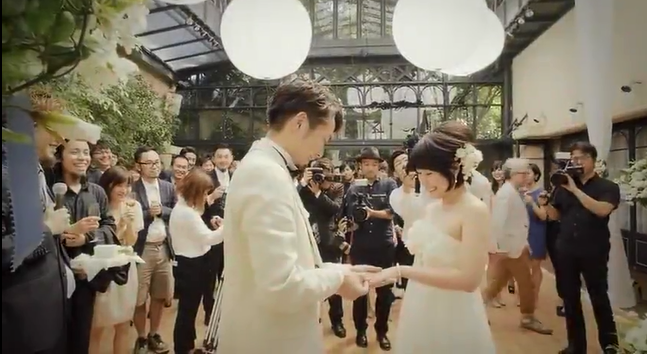 The full music video for Arashi’s wedding song Ai Wo Sakebe is out! Part of the MV was shot in an actual wedding reception held in Tokyo. The PV also features footage from dance rehearsals of Arashi, the groom and the groom’s men before Arashi’s surprise appearance at the reception. The single will be released on September 2.

In addition, the group announced the release of their 14th album, Japonism on October 21. In their 16th year, Arashi expressed their new interpretation of the wonderfulness of Japan in their unique way through their new album “Japonism.” The album features songs that are different from previous songs, and is an album that showcases Arashi’s ambitious challenging spirit and continuous evolution.

The music and lyrics for the lead song (title TBA) was done by Hotei Tomoyasu, who is based in London, with “Japan seen from the outside” as the theme. ARASHI will express the “wonderfulness of Japan” through song on top of a tense Hotei sound, where the battle of (ARASHI)x(Hotei)x(Japanese instruments) sounds takes place.

Arashi will also hold the 2nd installment of Arashi BLAST that started in Hawaii last year with Arashi Blast in Miyagi, in response to the request of Miyagi’s governor, Murai Yoshihiro, to aid the reconstruction in the disaster area that was hugely affected during the Great East Japan Earthquake. The group will be having a 4 day concert in Hitomebore Stadium Miyagi (Miyagi Stadium), expected to mobilize 200,000 audience. The nearby Miyagi Sports Park will also be integrated with a special corner for local goods and gourmet in collaboration with the locals.

Earlier on, the group announced the schedules for their Dome Tour this year. Concert dates, album details, and their latest music video below.

*Ai Wo Sakebe not included