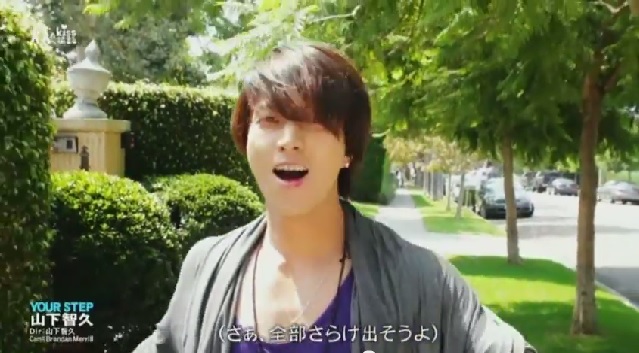 Yamashita Tomohisa’s new song ‘Your Step’ is the theme song of his variety show ‘Otona no Kiss Eigo’. Lyrics is provided by Naoto Inti Raymi and the song will have an English and Japanese version. The release date is not confirmed yet, either whether there is an upcoming single. But there are plans for an album this upcoming fall/ autumn.

Recording of the song and filming of the music video were done in LA. Yamapi directed the PV and this was his first time doing so. This was part of the task assigned to him by his variety show. Aside from handling the shoot, he needed to finish filming in one day. The show’s staff, producer and some scenes from his babysitting stint in LA were also featured in the PV.

The PV of the English version of the song was aired in the recent episode of ‘Otona no Kiss Eigo’. Check it out below for some carefree and casual Yamapi.