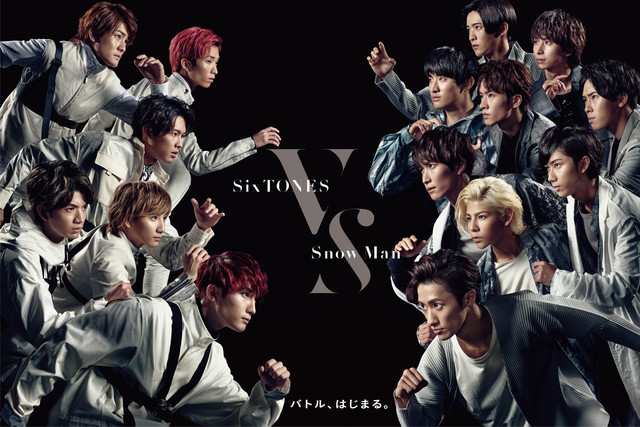 Johnny’s latest groups SixTONES and Snow Man made their major debut with the single “Imitation Rain / D.D.” The groups made their debuts together, billed as “SixTONES vs Snow Man”. This is the first time for two different Johnny’s groups to make their debut on the same day, and on the same single. This is also the first double a-side debut single for a Johnny’s group.

The experiment seems to have paid off, Oricon has reported that “Imitation Rain / D.D.” has sold 772k in just one day!

SixTONES was introduced for the first time in May 2015, at an event for Johnny’s Ginza. Snow Man is eight piece unit, but their origins go back to 2009. At the time they were known as “Mis Snow Man” and had 9 members.

According to a press release, SixTONES and Snow Man will be “friendly rivals”, determined to push forward in their own unique ways. sixTONES will be handled by Sony Music, while Snow Man will be joining V6 and Kis-my-ft2 under the avex family.

Their debut single is on track to sell over 1 million copies in one week, an impressive feat shared by their seniors KAT-TUN and KinKi Kids.