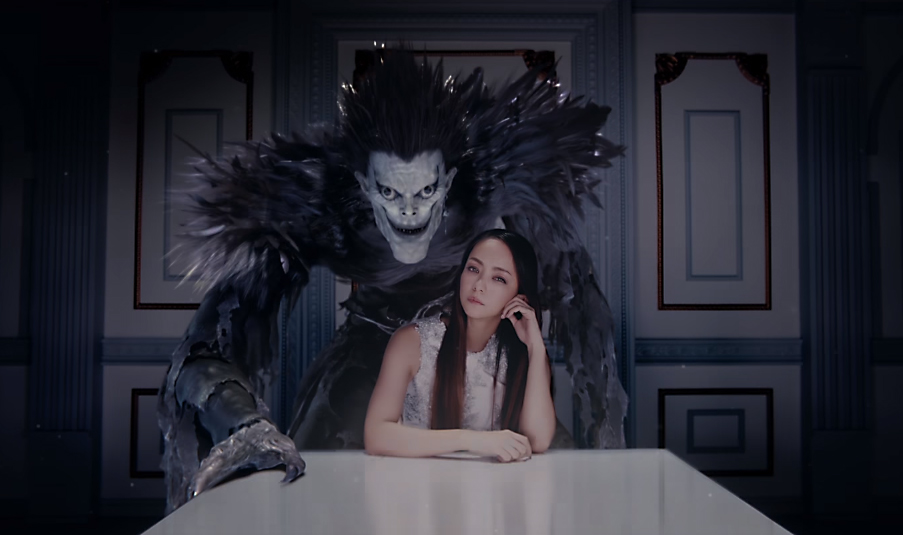 The short version of Namie Amuro‘s newest video “Fighter” for the upcoming film Death Note: Light Up The New World has been released to her official YouTube channel. The song is an English-language dance number written from the point of view of the character Death Note character Misa Amane.

On trend with her recent releases, Amuro serves heavens-high production value yet again.

The video takes place in a floating cubical fortress chained above a body of water. The camera traverses through the interior where we meet Amuro in a long, winding hallway with doors leading to different dimension-defying locations. Between choreography (which is really… something else), she soon finds herself in a bright dining room where the shinigami Ryuk sits  with a plate apples. With her eyes glowing red, I don’t trust whatever they’re plotting.

Check out the short PV below:

Additionally, check out the other A-side from this single “Dear Diary“.

A new trailer for the upcoming Death Note: Light Up The New World live-action movie has been released. The Japanese-language film is Nikkatsu’s fourth film in its Death Note series, which is based on the manga by Tsugumi Ohba and Takeshi Obata.

Check out the new English-subtitled trailer below:

Death Note: Light Up The New World will be released October 29 in Japan, with an Australia & New Zealand release scheduled for November 10. No North American release has been scheduled as of yet.