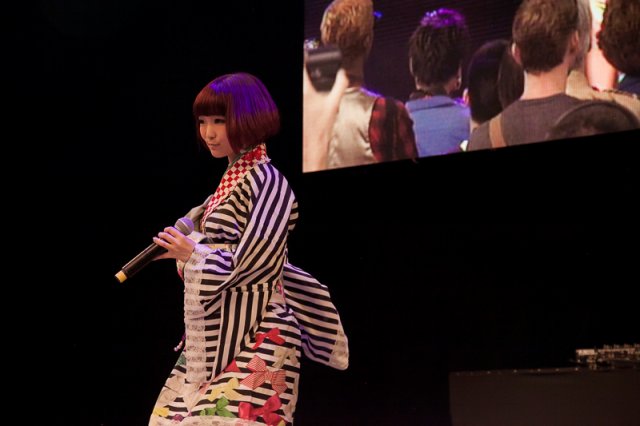 As reported on Natalie, up-and-coming singer Yun*chi has announced her second major single, “Wonderful Wonder World*”, to be released on October 22nd. The release will contain three new tracks, the titles and cover art to be announced at a future date. This news follows her most recent mini-album “Starlight*” and the conclusion of her second appearance at the Japanese cultural event Hyper Japan in London, where she performed to great success. Read Yun*chi’s comment and watch the videos from the event below!

Hyper Japan is a Japanese cultural event held in London, England each year during July. This year, the convention spanned the 25th to the 27th and featured a variety of guests and presented unique aspects of Japan. Yun*chi first appeared at the event last year in July and was well-received, and appreciated similar reception this year as well. Wearing a kimono-like costume, her live performance kicked off with her cover of “Tenshi no Yubikiri”, followed by her most recent track “Starlight*” and crowd favorites “Waon*” (a collaboration with IroKokoro Project) and “Your song*” (ending theme song of the anime Log Horizon).

Yun*chi also gave a comment regarding her feelings on being invited back to the event:

Last year’s Hyper Japan was the first time in my life that I’ve been overseas, and the first time I’ve performed abroad, so when I returned to Japan from the Heathrow Airport, I strongly thought “I hope I can come back again” as I boarded the airplane. And when I arrived at the Heathrow Airport again this year, the good luck bracelet I had on accidentally broke*, and it felt very much like fate.

I was really glad to have a wonderful time with everybody at the concert! I was also very happy to participate in an event that features Japan and felt that I wanted to become more familiar with London.

*Translator’s Note: This is a belief that when your good luck bracelet (misanga) breaks, your wish will come true.

There are some videos of her performance uploaded by Hyper Japan attendees:

Additionally, Yun*chi is scheduled to appear at the J-music Lab in Gelar Jepang event held in Indonesia between August 22nd-24th. It will be her first time in the country, so please give her a warm welcome!