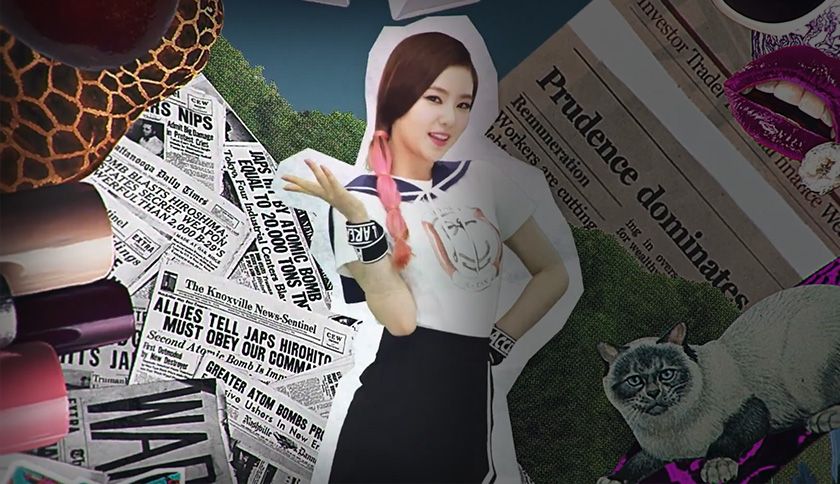 Less than an hour after the release of their debut music video ‘Happiness‘, the new girl group from Korea’s SM entertainment Red Velvet began catching grief for featuring what is being described as “anti-Japanese imagery”.

The video contains a distinctive combination of live action and animation, making heavy use of digital collage. The anti-Japanese commotion stems from the fake American WWII newspapers that are spread out in the background with headlines reading “Japs Hit by Atomic Bomb“, “Allies tells Japs Hiroito must obey our command” and “Bomb Blasts Hiroshima: States Secret Weapon“. Only for a second is the footage shown, but it was still intentionally placed within the video to convey some sort of message.

A lot of people are asking what that message could possibly be that required the inclusion of these newspaper headlines, as a scandal like this could have easily been avoided without them.

Some fans of the group are defending the video, suggesting it goes along with the lyrics that highlight the “corruption of politics”: “That money, that power / It’s been awhile since we’ve stopped giving attention to it”. They maintain their position, citing the war imagery and references to the Atomic bombings of Hiroshima that killed nearly 80,000 people act as the “antithesis” to the enjoyment of life.

The newspaper headlines show up around the 35 second mark.

News of this incident has exploded on the Japanese web. The term “SMさん” soared to the top of Japan’s twitter trends shortly after the video was released with Japanese netizens sharing their reactions to the situation.

An Atomic Bomb news article calling us Japs, using terrible 9/11 imagery. How should I put it… is SM entertainment run by idiots?
“Jap” is a terrible word. As one would expect from SM.
You can’t be fucking serious SM.
“japs”…… is SM mocking us?This is making me angry.
SM, the same company that previously used the Rising Sun flag nonchalantly? I have a feeling this won’t be the last time.
I’m so disappointed in SM. It’s not the members of Red Velvet’s fault. Hopefully It’s just a misunderstanding.
Wait a minute, SM is benefiting off all the attention we’re giving them.
I like SM, but I have to say this is the worst thing they’ve ever done.
I wish SM would take care of their artists better. After JYJ and recently Kris and f(x), this debut is surrounded by a lot of negative energy. Their idols are good, but their business is dirty.

In the past, SM entertainment received flack when Girls’ Generation released the covers for their second mini-album ‘Sowoneul Malhaebwa’ (Genie) back in 2009 that included an aircraft used by Kamikaze suicide bombers in World War II. Once sharp-eyed netizens discovered this, the covers were promptly altered.

SM Entertainment has yet to make an official announcement regarding the scandal but we can soon expect some major damage control.

UPDATE 1: SM Entertainment has stated that they are working hard to fix the insensitive newspaper articles in the ‘Happiness’ music video. They claim the director used random pictures he found (that just happened to all be about the same topic).
UPDATE 2: SM Entertainment has released a new version of the video without the insensitive materials. The previous video has been removed. 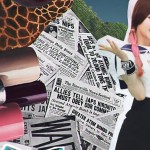