Last August 11, Universal Music Japan has opened its official TwitCasting Channel. To celebrate the opening, it held TwitCasting Music Week, where users can watch a line up of Live distributions of local and international artists under the label. As such, when Lady Gaga arrived in town last August 11 to promote her latest album, ARTPOP, thousands of Japanese fans passionately welcomed her in Narita and on their smartphones. 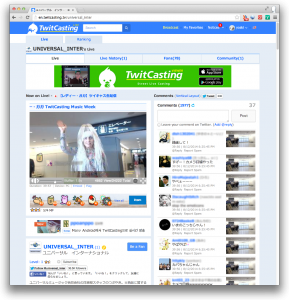 Investors are trying to seek out the next hit app after local online chat app LINE has seen global success. One of these apps that’s growing in popularity is TwitCasting, a Japanese app that lets users stream live video from their smartphones for free. The app lets users post text comments while watching video, facilitating active communication between content providers and viewers.

The concept itself isn’t new but TwitCasting’s focus on teenagers is the differentiating factor that holds a degree of potential for it to gain more traction. The younger generation seems to prefer real-time communication which the service offers.

“It will enable us to deliver information effectively to young people who don’t have PCs”, according to Universal Music, on  launching its own TwitCasting page. On its page, users can also be a “supporter”, where notifications are received as soon as their Favorite artist starts a Live.