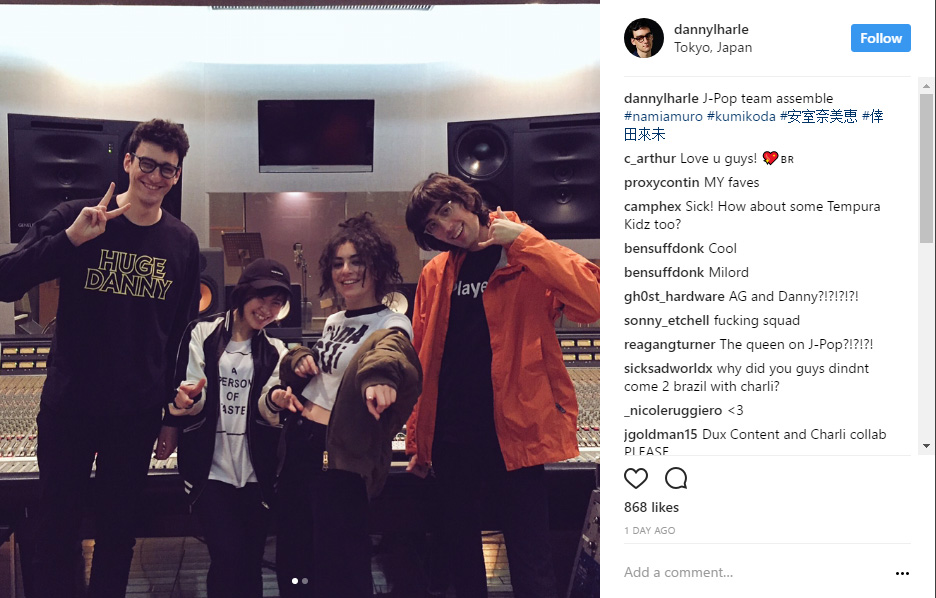 Are hashtags on an Instagram post news worthy? Maybe not. Is this reaching? Perhaps, but it definitely opens the floor for a little gossip and conversation.

In a recent Instagram post captioned “J-Pop team assemble,” PC Music producer Danny L. Harle updated his following with a photo carousel from a studio in Tokyo with hashtags for J-Pop legends Namie Amuro and Koda Kumi (or at least Kumi and “namiamuro” [sic]).

Along for the ride includes appearances from PC Music producer and founder A. G. Cook as well as frequent collaborator and singer-songwriter Charli XCX, who are presumed to contribute to the alleged track(s). Also pictured is Kanata Okajima, a singer-songwriter who has worked with many Japanese artists such as Namie Amuro, EXILE, E-girls, and Hey! Say! JUMP. Her Instagram post includes mention of a “collaboration” with avex.

Perhaps they are just drawing inspiration from the two chanteuses while assembling a new song for someone else, but many fans in the comments suspect that a collaboration between the two is brewing, or at the very least, potential PC Music songs for both of the artists. But I don’t know, a collaboration is looking likely. Get your wig glue.

Since its inception 2013, music label and art collective PC Music have not been subtle about drawing their inspiration from Japanese pop culture with their bubbly, hyper-produced synths and surreal visuals.

Charli XCX herself has been vocal about loving Japan, has released Japanese versions of her songs, and has filmed a music video in Japan:

I just loved how otherworldly Japan seemed. […] From all the movies and photographs that I’d seen, it looked so exotic. When I was younger I was really into Perfume, who I still love, and I watched a lot of Japanese films like “Akira” and “Ichi the Killer,” crazy movies like that. It was always my ambition to go there as soon as I could.

Not to mention there are already connections set in place. PC Music associate SOPHIE, a London-based electronic music producer, has previously produced “B Who I Want 2 B” for Namie Amuro, which is the ninth track from her album “genic” and featured virtual popstar Miku Hatsune.

And last year, it was rumored that Kyary was working with SOPHIE on new music. Though nothing materialized out of that (yet), Kyary released a split single with Nakata featuring Charli XCX.

Namie is no stranger to collaborations, having released the album “Checkmate!” in 2011 which featured a collection of her collaborations with other musicians released between 2003 and 2011.

Would you be down for a PC Music-produced collaboration between two J-pop legends?