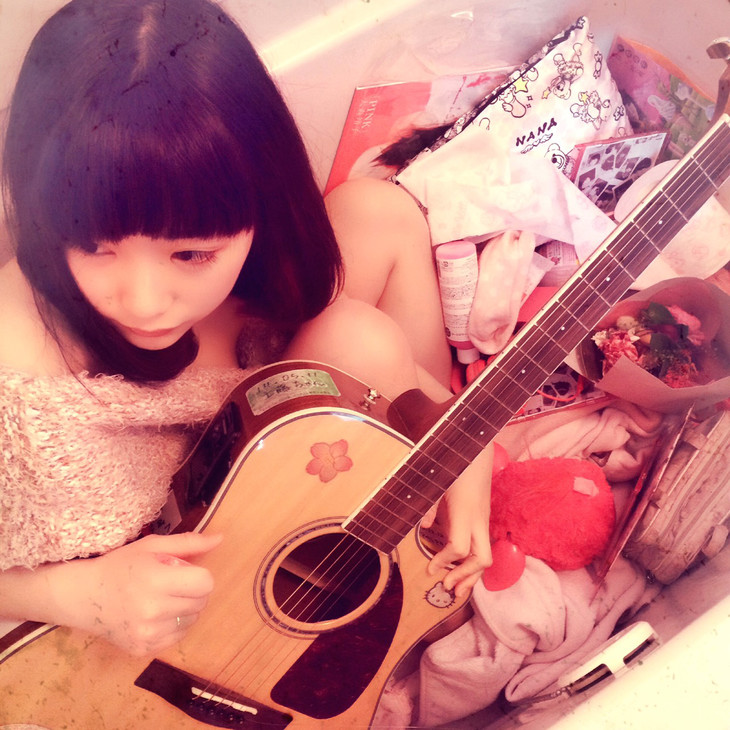 Relative newcomer Kudo-Chan is more than just a little bit representative of her idol, Seiko Oomori and is about to unleash her first official mini album. Read more about this exciting new face after the gap.

The first exposure I had to Kudo-Chan was a YouTube video of her stripping down to nothing but a bikini, grasping her guitar and playing her heart out to a highly emotional rendition of Seiko Oomori’s “Magic Mirror”. Then I noticed more… the said guitar was a “Gibson Hummingbird”- the same that Oomori uses. She also has appeared in a few Seiko Oomori videos- most notably as one of the girls in the MV for “Aishiteru.com“

Indeed she is the giga-fan. She has shaped her sound and image around her idol. Hell, one look at her blog‘s history- and she includes any major Seiko Oomori related event alongside her own (the entry for 2012 claims that her seeing “Seiko Oomori and the Pink Tokarev” was “fate”). But she also does it with such earnest that any finger pointing or calls of ‘rip off’ seem unwarranted. She indeed, represents a heartwarming figure of her own- and on the eve of her first major release, I am getting quite excited to hear it.

(This is the said bikini clad video- the Magic Mirror cover that was brought to attention starts about 10:12 mins in.)

After a strew of demos, live singles and self releases in CD-R format (all of them being sold at live shows only, with one being available digitally on OTOTOY), Kudo-Chan is now prepping to release her very first ‘official’ mini album, entitled ‘Watashi Kara Sayounara‘- which comes out next week. Previews suggest that indeed, it will be a Seiko Oomori-esque affair (the amount of times I’ve mention the “O” word on this article, did you expect any less?), but with Kudo-Chan’s own personal spin on things. It sounds to have a delicious indie feel to things and should charm the pants off of any Oomori fan, with its mix of punchy folk and cute bubbly idol-like pop. There seems to be a good amount of punk thrown in there to measure. As a notoriously avid female singer-songwriter fan, I’ll be supporting her work for certain!

‘Watashi Kara Sayounara‘ comes out on May 13th, if you’re interested please support the 22 year old by purchasing her mini album! Release info:

Will be available on CD and also as a 24 bit OTOTOY download, which is currently up for preorder.