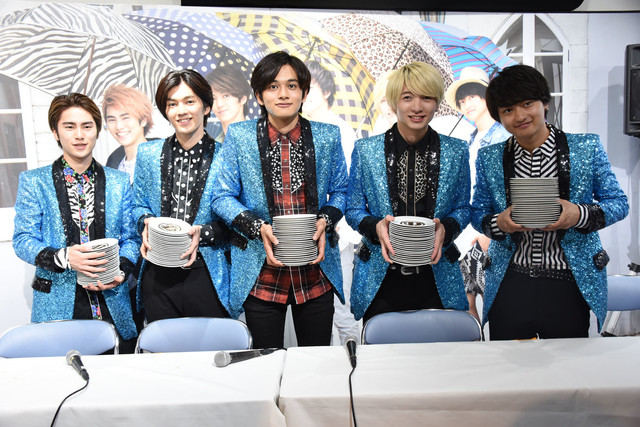 Natalie reports that the event “Sakana, Gyo, GYO de FUNFUN” was held at a new fish-themed pop up store by DISH// and 109MEN’s at the Shibuya109 department store and was attended by 109 slashes, the name of the group’s fan base.

The group’s rapper Tooi Tachibana took to the stage first and proclaimed how hungry he was and revealed that they (minus Daichi) had not eaten all day. After a short talk segment, the audience chanted for the competition to begin.

At first, the boys enjoyed the sushi comfortably and casually talked about their favorite sushi; member Ryuuji Kobayashi commenting, “tuna and octopus.“

After only 4 plates, main vocalist Takumi Kitamura declared he was already full. Round after round, the members threw back their pieces of sushi with agony, and one by one each member came to their limits filled to the brim with sushi. With only five plates left, the members grimaced. Tooi asked for helped from his other members, but he was on his own.

In the end, they accomplished their goal.

“Do you hate sushi now?” asked the moderator.

“Absolutely not! My stomach is full because of how much I love sushi,” Tooi swiftly responded.

When the challenge was over, each attendee got a special limited-edition plate with DISH// designs decorating them.