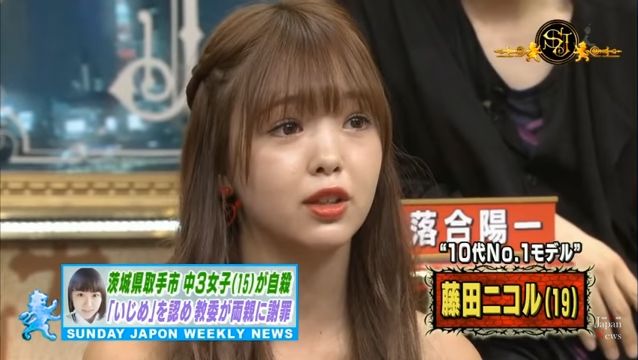 Talent and model Nicole Fujita has been met with criticism from online commenters following her comments on Sunday’s episode of TBS’ “SUNDAY JAPON“.

The program discussed a bullying problem that occurred in Toride City, Ibaraki Prefecture. They covered a specific story in which a junior high student committed suicide in November 2015 following acts of bullying from a fellow student. In the girl’s diary, found after her death, she reportedly gave the bully’s name and wrote: “I do not want to be bullied anymore.“

Until now, the Toride City Board of Education denied the existence of bullying within the school district, claiming that the situation was “not that serious“. On the 30th of last month, they withdrew their stance and the education chairperson apologized directly to the parents of the student after an investigation prompted by the parents.

Instead of showing compassion for the student who took her own life, Nicole Fujita was more worried about the bully, considering their privacy and how it could affect them in the future.

“They’ll have to deal with it for the rest of their lives,” Fujita commented. “I’m worried that people would go on the internet and find out who did it.“

Director and critic Terry Ito preached that, apart from needing to atone for the act they committed, the bully’s rights should be protected and they should be allowed to live their lives without any issues because they didn’t actually kill them.

Model Mika Ahn criticized the original stance of the Board of Education. “By not admitting that there was a bullying problem, it didn’t allow for an opportunity for the bullies to learn from their actions.“

Cosmetic surgeon and talent Ayako Nishikawa disputed the claims from everyone sympathetic towards the bully, which lead to an argument concerning accountability and the bully’s privacy.

Nicole went on to confess that she herself had been a victim of bullying while in school, which is when the digital pitchforks came out. “Then why are you not sympathetic towards the victim?“

Comments compiled by Sirabee came for blood, demanding justice for the girl who took her own life: