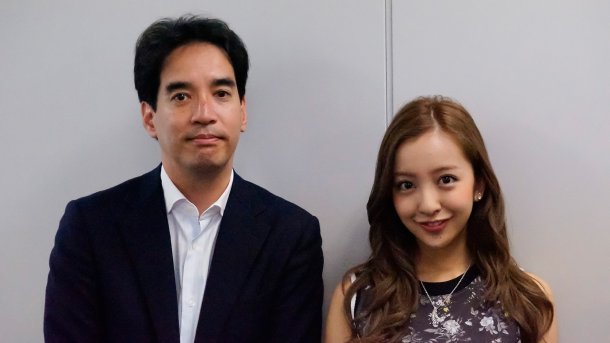 The Japanese government has identified the culture industry as one of five potential areas of growth. As part of its Cool Japan Strategy Promotion Program, the Ministry of Economy enacted Tomomi Itano as MC of a TV ASAHI show in 2013. She has continue with her efforts with  ”Tomomi Itano no JAPANEEDS’ to further spread Japanese culture abroad.

The swaggalicious singer has been working with them for a while with ‘Tomomi Itano no ii ne! JAPAN‘ which was translated to many languages including English. ‘Tomomi Itano no JAPANEEDS’ uses a ranking format and sums up a variety of points why Japan is so appealing. Previously she filmed in Taipei and made a guest appearance on MTV program “I love idols of Asia” as well as the fashion show ‘FamilyMart Asia Collection BIGSTAGE‘.

Natalie.mu reports Itano met with Ministry of Economy Trade and Industry Manager Hideaki Ibuki (pictured) and considers fashion and makeup to be an important export from Japan. In addition to her national tour following her 1st album ‘SxWxAxG‘ released yesterday(#6 on the dailies charts), she will perform live in Taiwan and Hong Kong this August. In response Itano enthusiastically said, “I want to spread Japan’s latest music and dance trends!”